Taylor Swift & Harry Styles Pose Together At VMAs After Party: How Close Did The Exes Get? (PHOTO) 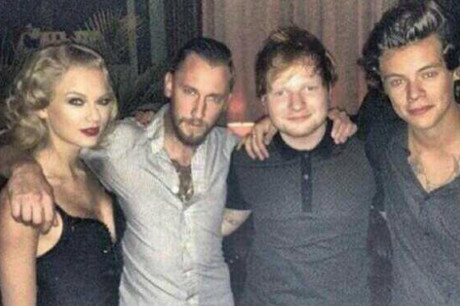 The 2013 MTV Video Music Awards aired last night and they were, needless to say, an overwhelming experience. From Miley’s super-sexual twerking to Lady Gaga’s weird-tastic opening to the 23-second appearance made by ‘N Sync, the night continued to surprise. Many of the predicted people walked away with the coveted Moon Man awards, including Taylor Swift, who managed to score The Best Female Video prize.  She also managed to totally bash her ex-boyfriend, Harry Styles, when he and his band went to present on stage.

When One Direction went to present an award, Taylor was caught saying, “Shut the F*** up.” If you don’t believe us, well, you should.

However, despite Taylor’s mean comment, maybe the two aren’t as bitter as we’d once thought: The two were caught posing together in the same picture at an after party. The picture was posted on DJ Spiky Phil’s Instagram account and features the famous exes — though Ed Sheeran and DJ Spiky provide a generous wall between the two ex lovers. Really, nobody looks happy to be taking the photo, so I wonder what was running through their minds. I have a feeling it was Mr. Spiky’s idea.

If you missed the 2013 VMAs last night, don’t fret, because we have the list of winners+red carpet fashion photos for you — CLICK HERE. Also, if you want a bit of info about who performed last night — who killed it and who gave off a what-the-hell vibe — CLICK HERE.