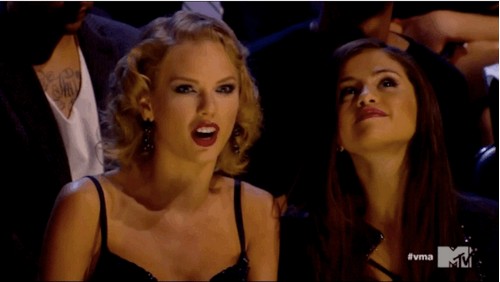 If you didn’t know, last night was the MTV Video Music Awards and of course One Direction was presenting; but Harry Styles ex-girlfriend Taylor Swift was in the audience and while they were talking the camera pointed to her sitting with Selena Gomez and you can see her mouth out the words, “Shut the fuck up.”

I’m not the biggest fan of One Direction but that’s incredibly bitter, she makes tens of millions of dollars a year and can’t handle seeing the success of one of her ex-boyfriends? It’s like she has some sort of grudge against him, which is pretty arrogant of her. Taylor Swift’s music is all about the same crap; she always sings about her ex-boyfriends and how she can’t find love. Considering how many people she’s dates; Taylor is practically a whore.

Taylor could have gotten so bitter because it was said that when Harry and her broke up Harry was completely cool with it all, it was as if he really didn’t care. He instantly moved on and never got jealous or anger about the whole thing.  It’s as if Taylor is frustrated that Harry didn’t want to get back with her at all; so now she just can’t handle seeing his success. Maybe it’s Taylor who didn’t get over Harry and now she’s incredibly angry at the fact he acts as if she was nothing special. Taylor is really pathetic.