Taylor Swift Desperate To Be Prince Harry’s Princess, Planning Hook Up While He’s In U.S. 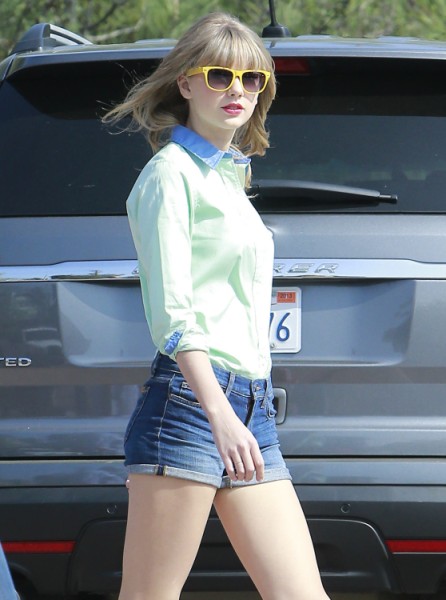 What a shitty welcome back to the U.S. For the record she’s not my Goodwill Ambassador. Did he switch his ticket all of a sudden? Did plans change? Is he opting for Canada instead? I can’t blame him. If I heard Taylor Swift wanted to get her sparkly fingernails in me I’d be running the other was as well. She wouldn’t play the game and let him sleep with her and move on. There’s really nothing in it for him. I don’t care what she says. That girl’s a clinger and she’s been known to kiss and tell a few times. On this trip to America I have a nagging feeling Prince Harry will be on guard against both.

So by now you’ve heard Prince Harry is planning a tour of the U.S. in May on behalf of the Queen. His schedule is pretty full doing a list of army/charity work but that hasn’t stopped the stories from circulating that he’s already planning a harem list of Hollywood hotties to keep him busy in his off time. Jennifer Lawrence is supposedly on the top though I wonder what she thinks about that! One person Harry didn’t mention? Taylor. And it’s pissing her off! According to The Sun, she’s desperate to meet the prince while he’s stateside and doing everything she can to get in some face time.

“Taylor’s desperate to get her name added on to the VIP lists of stars being lined up to meet Harry. She loves everything about him — especially his ginger hair and English accent. She’s dated JFK’s great nephew Conor Kennedy, who is considered American royalty, and Harry would be a massive step up from him. Taylor is also Harry’s type as he loves blondes,” a source said.

Seriously, when did The Sun become Star magazine because this shit is getting ridiculous. Still… let’s play along. I’m sure the Queen has already given Harry his “keep your dick in your pants” speech by now but let’s hope she also throws in the extra “Don’t even look at Taylor Swift!” line. The last thing the royals need is a pop song about their most eligible bachelor.

It would be beyond amazing though, wouldn’t it? Screw Cressida Bonas! Taylor could definitely be Prince Harry’s princess. It’s almost like she’s been waiting for this moment. Conor Kennedy was just a second-class royal anyway. Taylor was getting herself prepped by all the Jackie O summer ensembles. Just wait. We’ll be seeing some serious Grace Kelly action soon. But would Harry bite? Of course he would! Reason and rationality are not his strong points.  But would he get burned if he hit it and quit it? Of course he would! Restraint is not one of Taylor’s strong points. It’s a match made in gossip heaven. I totally condone.

Do you want to see a Prince Harry/Taylor Swift hook up? Is Harry that dumb? Don’t answer that.