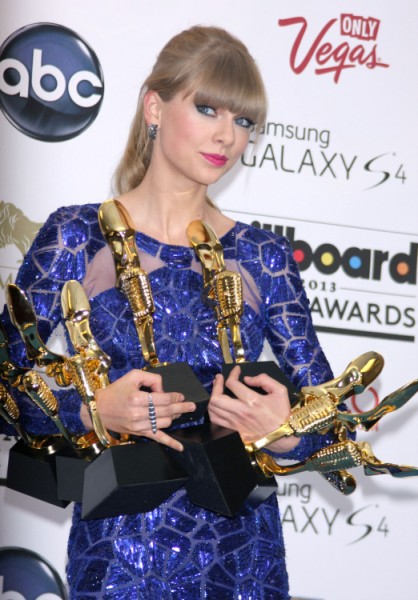 Home girl sure was feisty last night! She actually reminded me why I used to like her. Poor Justin Bieber. Taylor Swift made him her bitch. He might have won the Milestone Award but Taylor let everyone know backstage it was pretty much bullshit.

Check out the video below. It’s amazing. It might even be as amazing as the tongue – maybe. I’m still laughing at that kiss grimace. But her reaction to Justin winning the billboard award so young is also pretty great. When asked backstage she merely said: “Can we have another question?” And that was that. Nice.

But, seriously, if I’m Selena Gomez I might be a tad on the annoyed side. Look man, I get Justin’s a major douche. I get that he’s a train wreck right now but dude had a bad night. He got booed. He got laughed at and now everyone’s doing it again today because of Taylor’s antics. If I’m Selena I might pull her aside and be all like “Ease up lady! I did date the kid for two years. The more you slam him the more pathetic I look by association!” That’s how I’d take it. I don’t care who you are now you will always be judged for those bad decisions and Selena breaking up and getting back together with Bieber was a bad decision. I wonder if she wants to call him. Maybe she could tweet him. Give him a little pick me up so he doesn’t seem like quite the whipping boy today. But where would the fun be in that?

What do you think of Taylor’s reaction to the Justin Bieber Billboard win? Was she a little too harsh last night or just saying what all of us were thinking?