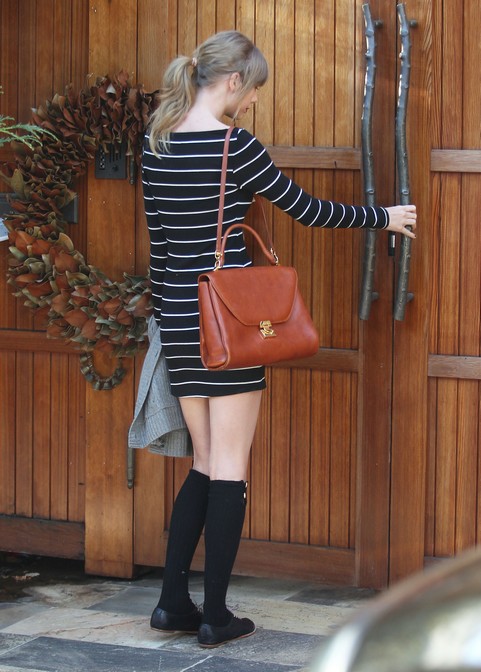 Taylor Swift, oh Taylor Swift, when will you ever learn? It usually rains men in Taylor’s life, but as with rain, it quickly filters into the gutter and joins that nasty It clown with the balloons and the terror in the sewers. Harry Styles was a good decision, we once thought – we knew it wasn’t going to last, but we were still hopeful. How long did they even date? Was it a week? A month? A lyric? We don’t know and we honestly do not care anymore. Taylor has become a romantic caricature who just cannot seem to commit. (What is wrong with her and when will she learn?)

Pictures were snapped of the star visiting a friend in the Pacific Palisades, California recently, and while she looked as luscious as a tree branch on Survivor, something still looked “off” with the singer. (Is it even possible that Taylor can suffer from heartbreak?) Any “normal” person who suffers from post-break-up craziness, usually either loses and/or gains weight. Once, when we broke up with a random, we watched Beaches for a week and sniffed Whiskey for a month, but never, ever did we stop eating. Instead, we raided the fridge and drooled in the wind while munching down on a tear infested slice of Death by Chocolate. It was fun while it lasted, but we soon joined the gym and became hotter than a pack of Taylor Lautners.

Taylor Swift, on the other hand, looks like she lost a tad bit of weight. We doubt she’s starving herself, but there’s definitely the odd chance that Swift is a controlled eater and stopped eating after the Styles break. Hey, at least at the end of it all, she’ll still be able to write an album about Harry and win five Grammy’s or something…