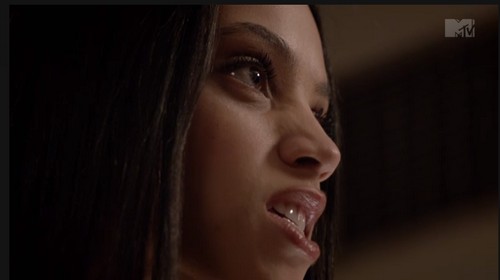 Tonight on MTV the popular show TEEN WOLF continues with its ninth episode of the third season called “The Girl Who Knew Too Much.” On tonight’s show Allison becomes suspicious of someone close to her. Did you watch last week’s episode? We did and we recapped it here for you.

On last week’s show we got a glimpse into Derek’s past. It was revealed that Derek used to be a lot different when he was younger. Eventually, Scott was told that he can’t beat the crazy Alphas.

Jeff Davis says tonight’s episode will reveal Lydia’s true nature, which we’re very excited about!  Allison begins to suspect someone dangerously close to her may be involved in the murders, and Scott and Stiles *FINALLY!* come to the conclusion that Lydia’s rising talents may be their best bet to solve the murders. After all, she has a proclivity for seeking out the dead and supernatural. Hopefully we will learn what her supernatural nature is. My guess? Banshee, a supernatural being that is drawn to death. Also, the killer will be revealed tonight. Hey, guys, guess what? The killer will supposedly be revealed tonight!

Tonight’s season 3 episode 9 is going to be an exciting one that you won’t want to miss, so be sure to tune in for our live coverage of MTV’s Teen Wolf at 10 PM EST! While you wait for our recap hit the comments and let us know what you think of Teen Wolf season 3 this year. Check out the sneak peek video of tonight’s show below while you wait for the recap!

The show begins with a policewoman walking through the high school hallway. It’s dark — as usual. She proceeds down the steps. She hears the door open. In walk a group of students–they say they’re practicing for a recital. Danny is among them. He asks if anything is wrong? The deputy says someone made a 911 call from inside the building. She glances down the hallway to see a body being dragged in through the doorway. She can’t reach her back up. She walks into the locker room, telling the mysterious person to come out with his or her hands up. She walks into the bathroom. She sees a body–it’s her. She sees herself, and then she dies. A heavily disfigured creature kills her. It’s the same face we saw in the flames at the end of the Motel Episode.

Meanwhile, Lydia arrives at the school with Allison. She’s called Scott and Stiles. She says it’s the same thing that happened when she found the dead life guard. She found another body.

Stiles’s father arrives. Stiles is saddened because the deputy that died is someone he was quite close with.

Allison’s laying in bed. Her father walks in and he tries to be all sympathetic. She says she’s not going to the recital at the school because she’s sad. He says school can wait. But as soon as he leaves her bedroom, she hops out of bed and grabs her throwing knives. She walks over to the window. Someone is there. Isaac is watching her. She grabs her and puts a knife to his throat.

In class, Stiles and Scott are talking. Scott thinks that he can get to Ethan for information. In the hallway, Aiden tells Ethan that he needs to stop getting involved with Danny — because it’s causing him to lose focus. Now that Danny’s not one they need to watch out for, he says to leave him alone. Aiden says that Lydia’s the one they need to keep their eye on — because she’s clearly special.

Stiles says that might be a good idea, to talk with Ethan, but the problem is getting the twins apart. They use Lydia to distract Aiden. While Aiden and Lydia are fooling around in the closet, a werewolf claw draws a spiral on the frosted glass of the door. Remember, the spiral is a symbol for vengeance in werewolf societies. Aiden claims it’s Derek.

Meanwhile, Stiles and Scott are chatting with Ethan. Ethan wonders why they want to talk with him. He says that he and his brother weren’t like the others (Ennis, Kali, etc.) when Deucalion found them. They were Omegas — the killers of the pack, basically the slaves of the pack. Deucalion helped him overcome their previous Alpha. They feel as if they are, in a way, indebted to Deucalion.

As they are chatting, Ethan gets a scratch on his chest. His brother is hurt. Derek’s sister attacked Aiden — the twins share a form of twin-tastic telepathy. Scott, Ethan, and Stiles run into the locker room where they’re fighting. They stop it. Cora is hurt badly.

Meanwhile, Isaac is beside Allison. Allison says that she doesn’t think her father’s the killer, but she’s not sure. While they look at the desk where the map is resting on, they see a Celtic five-fold knot. When they run the black light over Mr. Argent’s desk, the pattern of the murders is revealed, with a list detailing each group of murders (Healers, Warriors, etc). The list is nearly completed. The last group of murders will be “Guardians,” which makes sense given the most recent murder: the policewoman. OMG is Allison’s father the dark druid?

Cora is tending her wounds in the locker room. Stiles tells her that she’s suicidal. She tells them that she did it for Boyd, who died last episode. Cora tells them that they are a bunch of stupid teenagers and that all they really do is “find the bodies.” Stiles says he’ll make sure she gets home.

Ms. Blake is walking on school grounds and she runs into Derek. She runs to him REALLY REALLY FAST and gives him a REALLY REALLY heavy smooch. She wonders where he’s been. She says she’s been afraid in his absence. She wants to stay with him, but she has to return because she has three more classes and must help get the recital going — which she initiated to honor the town’s recent losses. She walks away in slowwwwww motion.

Scott visits Ms. Morrell. Allison give Stiles a phone call and conveys the information she knows regarding the killer’s next target. She says he must get his dad to listen.

Scott chats to Morrell. She asks why he’s wasting time talking with her. She says she’s not the killer. She says she’s the one who’s been pulling the leash of the Alphas (to which she advises) taught — keeping them in line when they’re wanting to kill. She says Deucalion wants a True Alpha and that he’ll always be ten steps ahead of him and his friends. He’ll do whatever he can to get to Scott. She tells him that Scott is his object of intense obsession, but that he also fears Scott.

There’s a teacher drawing on the chalkboard. He drops his chalk . . . . . . . . . . . Lydia’s in the hallway. She bends down to pick up a piece of chalk and walks into a classroom. She’s in a trance. With the chalk, she writes “2” on the board. And shrieks. She seems to be foretelling another murder.

Everyone congregates in the classroom. Lydia’s frustrated that nobody believes her that the teacher will be the second murder.

Stiles is pacing back and forth in his dad’s office. He’s about to tell him about the supernatural community. Cora is with him.

Allison gets a text from Lydia: “Mr. Westover is missing.” Allison says she needs to stop him — she thinks she’s going to stop her father. She looks at the map her father has — to find the next spot of sacrifice. They find it on the map.

Stiles finally tells his dad about werewolves, etc. He struggles to wrap his mind around everyone. He clearly doesn’t believe him. He says Cora can prove it because she’s a werewolf. She agrees to show him but before she can she *of course* passes out.

Isaac and Allison pull up to the supposed site of the next sacrifice. It’s an abandoned building of sorts. They see the teacher being chained. The Durak (dark druid) is there. Allison’s father runs in and starts shooting at the druid, but he or she runs away. The Durak is significantly disfigured.

Everyone understands that it’s not “Guardians” that are being targeted but “Philosophers.” Tara, the deputy who was killed at the beginning of the episode, used to be a middle school teacher. All the teachers file into the recital for the upcoming performance. Who will be next?

Allison is angry at her father for lying to her that he’s been tracking the druid for months. They head to the recital, in an effort to save the third teacher.

Stiles continues to try to persuade his father about the supernatural, but he struggles. He says, “Mom would have believed me.”

Everyone prepares for the recital. Ethan fixes Danny’s tie. Ethan tells him, “If anything happens, find me, find me first.” Aiden watches it all from the corner — he still doesn’t like the fact that they’re getting closer.

Lydia finally asserts her ability. She says, “Maybe if I stop trying to fight what I really am, and just let it happen, I can find the bodies before it happens.”

Derek is at his sister’s side. She asks what’s happening to her, but Derek doesn’t know.

Stiles’s father chats with Scott’s mom. He asks her for some old hospital records.

The recital begins. They start playing a really sad song — perfect for an impending murder. Lydia gets a text from Aiden: “need to see you now. life or death.”

Scott’s entire team is now at the recital.

At the hospital, Scott’s mom finds the records he wanted. A few years ago, there was a similar instance of thousands of birds sacrificing themselves. “For what?” Scott’s mom asks. “Not what. Who,” Stiles’s dad says. He seems to be piecing everything together.

The text Lydia got wasn’t from Aiden. Someone took his phone. Lydia enters a dark classroom. Someone attacks her. Guess who that someone is . . . . . MS. BLAKE!

Stiles and Scott run around screaming for Lydia. They can’t find her. The recital’s still going on.

Lydia wakes up in the classroom. She’s bleeding. Ms. Blake’s there. Lydia asks what’s happening. She says that she’s not a sacrifice, she’s just a “Girl who knew too much.” She screams so loud–every werewolf hears her bloodcurdling scream. Ms. Blake stops. Ms. Blake tells her that she’s a Wailing Woman, a banshee. Ms. Blake pulls a knife to her throat. But the person who dies is the woman playing the piano at the recital.

Stiles’s dad arrives. He tells Ms. Blake to drop it. She throws the knife into his chest. Scott arrives. Stiles’s dad finds out that he’s a werewolf. Scott tries to fight Ms. Blake, but she’s strong.

He shoots her in the leg but she heals. All the sacrifices have imbued her with unnatural powers. When Stiles’s finally arrives, Ms. Blake has taken his father somewhere. They fled.