Are Teresa Giudice and Joe Giudice Getting A Divorce? 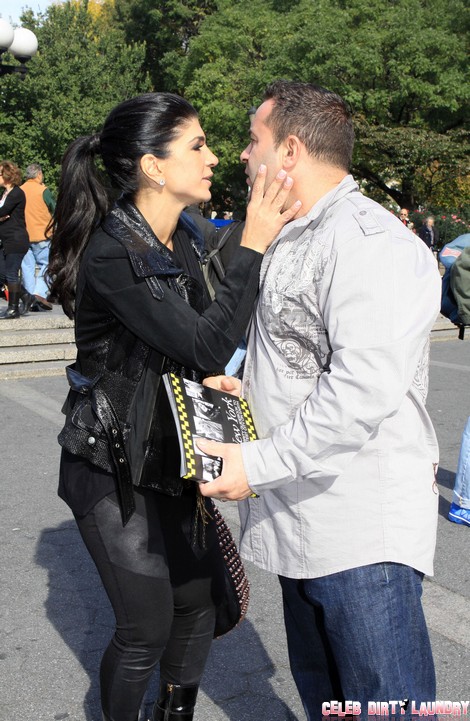 It was just announced that Teresa Giudice’s husband, Joe Giudice, is leaving the Real Housewives of New jersey. I wonder why. Does it have something to do with what happened last season? When he stupidly forgot the microphone was still on and the viewers got to hear what he said to his mistress. It wasn’t that bad except for him calling his wife a “bi*ch” and a “c*nt” on television.

Everyone thought Teresa would divorce Joe then and there.  But she didn’t and up until February she was still fairly vocal about fighting for her marriage. Especially when she tweeted Patti Stanger, the millionaire matchmaker, “all relationships are a work in progress. One can only judge by walking in someone’s shoes. XOXO.” This was the first sign that something was seriously wrong?

When has Teresa ever been this CALM?!?! She shot to stardom by flipping a table and she’s going to tweet the woman who called her husband a “bad dude” with X’s and O’s. She’s done worse to her brother. Joe Gorga. Stand by your man looks nice for a while but people start to think of you less a martyr and more a Rihanna – and Teresa won’t go down like that.

Joe could have made his Facebook moment way before season 4 even ended. The only reason he would make the statement now, so close to season five’s premiere was if Teresa finally kicked him out.

Starting a new book tour as well as the paycheck coming from the reality show, Teresa’s built an empire for herself and no longer needs to be the trophy wife. According to The Examiner, “She’s only stayed with Joe so long to keep her strong fan base and pull in the most profit she can before she gives him the boot.” Anyway when you look at it, he’s not much of a prize now.

Joe is facing fraud charges for assuming his brother’s identity in order to get a driver’s license. He couldn’t use his because it was suspended after a DUI. As matter of fact it’s suspicious that he announced his exit on the same day as his first one in court. Did Teresa not show up in court after originally claiming she would be there every day?

Let’s see, her tour begins May 7 and unless I’m mistaken trials can drag out longer than 6 weeks. So what kind of supportive wife would book a money-making scheme with her husband facing, or possible already in, jail? The one that’s going through with a divorce.