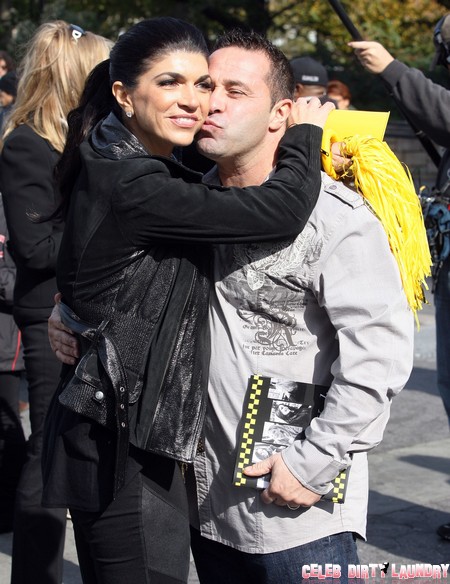 It’s cute how the Teresa Giudice and Joe Giudice of the Real Housewives of New Jersey seem to think they are absolutely bulletproof. Earlier this week, Joe rejected a plea deal for fraudulently obtaining a driver’s license. According to New Jersey authorities, Teresa’s husband used his brother Pietro Giudice’s identification (marriage and birth certificate’s) to obtain a new license shortly after his own was suspended due to a DUI charge in early 2010.

The state’s plea offer of five years in state prison was turned down by Giudice’s attorney, Miles Feinstein during the brief hearing in Superior Court in Paterson, NJ.  A judge then set a date of October 1st for Giudice to return to court to set the trial date.  Joe could be facing up to ten years in prison but Feinstein is hoping that he can get his client off with probation.

Speculation abounds over what will happen to this marriage once Joe checks in to jail.  Teresa is currently standing by her man as all of her Housewife co-stars predict that divorce is in the air.  Caroline Manzo has predicted that Teresa will leave in order to set a good example for her girls. Teresa’s ex bestie, Jacqueline Laurito, has said that the Giudice’s have led very separate lives for a long time now.

Do you see Teresa leaving her marble encrusted mansion with her identically dressed kids to go and visit daddy for fifteen minutes behind bars?  Actually, if Teresa has any hope of holding onto that house she probably better dump Joe and quick.  Will Teresa wait until her husband is in a prison jumpsuit before filing for divorce?  Tell us your thoughts in the comments below.