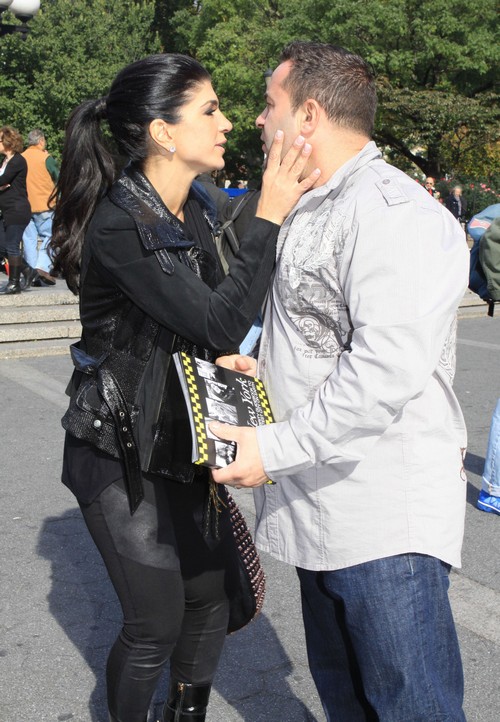 Teresa Giudice seems to be in denial about her future as both and her husband, Joe Giudice, face up to fifty years of jail time. According to the NY Daily News. “Teresa thinks people are coming after her because she is famous. She honestly thinks she has done nothing wrong.”

Apparently, neither Teresa nor Joe have entered a plea, with a source adding, “She is old-fashioned and thinks her husband knows best.” Well, they better consider their careers before they think about going to trial for tax and fraud charges. A source explains that Bravo will likely either be cancelling Teresa’s reality show or kicking her off Real Housewives of New Jersey, as well her planned cupcake spin-off TV show. The source says, “Nobody wants to see their talent in this kind of a situation. They [Bravo] are not interested. Bravo only spins off happy situations — marriages, baby news. Not prison.”

Well, at least Bravo has some standards. E! did not when Pretty Wild was going through the same situation, where one of its stars was getting arrested for being part of the Bling Ring.

Whichever way you slice this story, Teresa doesn’t face a bright future. If they plead guilty and enter a plea, they will probably get off with reduced sentences but they won’t have a paycheck or a career. And even if you don’t count reality television as a career, keep in mind that Teresa was making close to $33,000 an episode of Real Housewives. And the other alternative is that she does get charged and convicted, which means she’ll be spending the rest of her life in jail. Tough luck, but this is what you get what you commit tax fraud.