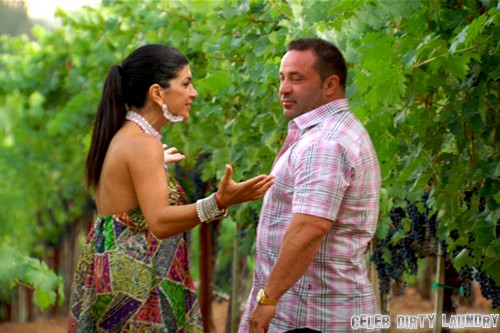 On the June 16 episode of Real Housewives of New Jersey we see the first fight of the season. The scream fest went down at the birthday party of Teresa Giudice’s oldest daughter, Gia. Teresa’s sister in law Melissa Gorga told Kim D she went to the hospital to visit her father in law. Teresa overhears the conversation and confronts Melissa, saying she lied about visiting papa Gorga.

I can understand why Teresa was upset with Melissa. She is still trying to re-establish trust with the JLo wannabe. Check out the video below – it shows Melissa changing her story about when she went to the hospital. Teresa tells the cameras “I don’t know why she would even lie that she went to go see my Dad… I think she’s just trying to protect her image.”

Melissa wants her fans to think she is the perfect wife and mother. However, there are a lot of negative stories about her floating around the gossip websites. The latest news is that Melissa was sleeping with her ex-boyfriend well into her marriage to Joe. Allegations that she was a stripper at a gentlemen’s club have still not gone away. There are also stories that the Gorgas are in financial distress. Melissa lying about visiting her father in law adds fuel to the fire that she is not innocent in the ongoing war with Teresa. Like Caroline Manzo, most of comments on her Bravo blogs call Melissa out on her BS every episode and defend Teresa. She keeps digging a bigger hole every time she opens her mouth.