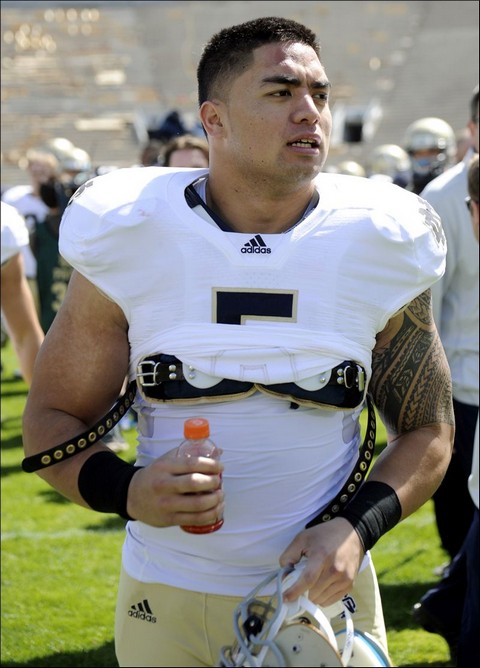 There’s always a lot of buzz when it comes time to name the new star of The Bachelor or The Bachelorette. It’s customary to pull a reject from a former season, but the habit isn’t a rule carved in granite! The plight of potentially idiotic Manti Te’o and his fake girlfriend’s death has been making headlines. Many speculated that he created the story to gain publicity, but last week the man behind it sought psychiatric help, validating Te’o’s innocence. He admitted that he didn’t confess the hoax as soon as he found out in early December, but we forgive him! We’ve all made jokes about it: how thick do you have to be to date someone solely over the internet and never question their existence? Well, the truth is out, and apparently Te’o has just what it takes to be a star on The Bachelor!

Mike Fleiss, who created the franchise—including Bachelor Pad, a spin off—tweeted, “Manti Te’o for the next Bachelor???” Yes! Kalon McMahon retweeted his support. You may remember Kalon from Emily Maynard’s season. He was sent home during a group date after Emily found out he referred to her daughter as “baggage.”I hated him for the rest of the season, before a tweet by him ended up in my feed. “This guy is hilarious,” I remember thinking. I followed, and saw that he is all about animal welfare, which is the key to my heart. It just goes to show that all is not as it seems on The Bachelor or The Bachelorette. While we’re talking about Kalon, why hasn’t he been made The Bachelor? The guy is hot, dramatic, and a little bit wicked! A perfect combination!

We would love to see Manti Te’o as The Bachelor. Besides the fact that it would follow the super-religious thing they’ve got going on with Sean Lowe (who has claimed to be abstaining from sex until marriage, and considers himself re-virginized through prayer), it would be great fun to watch someone who comes off as so naïve be surrounded by 25 lusting women. How would he respond? I sort of imagine the reality of it all being too much, and Manti insisting on giving everyone roses, every time! Would you watch Manti on The Bachelor?