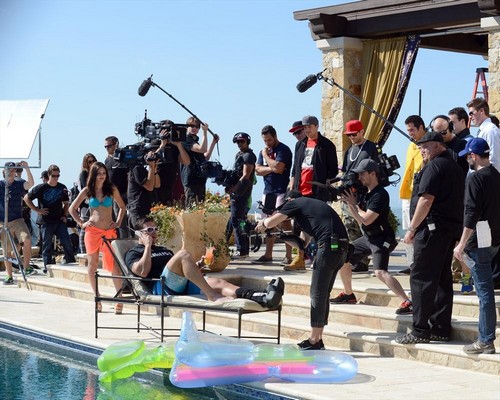 Tonight on ABC THE BACHELORETTE Desiree Hartsock returns as she continues her search to find her Prince Charming.  On this week’s episode love develops atop the Hollywood sign, Soulja Boy teams with Desiree and the Bachelors for a rocking rap music video, and some of the men display their

ulnerability in the race for the roses.  Did you watch last week’s premiere episode where Desiree was introduced to the 25 suiters for her heart?  We did and we recapped the episode here for you.

On last week’s show 19 roses are brought out early, and with them the battle for Desiree’s heart began.  Desiree Hartsock was slowly but surely chipping away at this heap of men that have thrown themselves at her feet.  After the roses were give out Diogo, Nick R., Mike R., Micah and Larry head home with Jonathan.

On tonight’s show a bridal shop provides the unlikely backdrop for Desiree’s first one-on-one date with the tall, dark and handsome Brooks; rap superstar Soulja Boy carefully crafts an aptly named rap music video – “Right Reasons” – using Desiree and a group of slick bachelors; and Bryden is treated to a scenic, romantic road trip up the beautiful California coast. But some of the men are already fighting for Desiree’s love and nearly come to blows. After careful deliberation, three men are sent packing as the Bachelorette attempts to make her fairytale come true.  At the end of the night after a dramatic rose ceremony, 16 men will be left to vie for Desiree’s heart.

If you cannot wait for the episode and need to find out more about what will happen tonight head over to our HOT spoiler for tonight’s episode HERE.

RECAP: Brooks gets the first one-on-one date and he is so pumped and excited to see Desiree. Drew is really jealous and wished he got the controversy. Desiree talks about the first time she cam to Hollywood and seeing the sign, she came to pursue her dreams. Brooks share his last relationship, he was in it for one year but he will take the chance to get his heart broken again if it is to fall in love. The two connect and Brooks goes in for their first kiss.

It’s late night and Desiree and Brooks are driving, they come to a road that is closed and Desiree encourages him to move the signs and forge through. A little more driving and there is a private dinner set out on a bridge for the two.

A date card arrives at the house and it reads “who is here for the right reasons?”.

Desiree and Brooks hear music, it’s a private concert for them by Andy Grammer and his band.

It’s time for the group date and Desiree takes 14 guys to a studio where they will record with rapper Soulja Boy.  The video will be called “Right Reasons”.  Chris, Brad, Bryden and Bobby are the three guys who don’t have dates.

The guys are wearing costumes and Brandon’s only consists of his shirt and his underwear; in the end they all do great.

There is one rose to give out and all the guys are excited about it. It’s night time and everyone is enjoying cocktails; some of the guys get alone time with her. Ben gets up and goes to spend time with Desiree, he doesn’t wait for her to ask him and sneaks in a kiss. A lot of the guys, Brandon included, thinks Ben is there for the wrong reasons.

Mikey T. also thinks that Ben is not genuine, he says that the majority of the guys in the house feel the same. Mikey T. has an unsettling feeling and approaches Ben; he tells him that he finds he has this politician feel and hopes that he is not fake. Ben says he doesn’t want any tension in the house.

At the house, another one-on-one date card has arrive at it is for Bryden; he’s going on a road trip.

Brandon pours his heart out to Desiree, tells her all about his growing up alone with is siblings, his father having left them and his mother was a drug addict.

Time for Desiree to give out the rose and she has chosen someone who was bold and used his time wisely; Ben.

Desiree is on her road trip with Bryden and they have driven to the beach first. Then the two pick oranges and end up at a beautiful resort for dinner. Bryden shares pictures of himself hurt in accident when he almost died. Desiree tells Bryden that his sharing his story with her meant a lot; she gives him a rose and then the two head into a hot tub. The moment gets a little awkward and Desiree tells Bryden to just kiss her already, he does.

Time for the Cocktail Party and the intensity keeps rising. Ben, Brooks and Bryden is safe heading into the ceremony. Ben gets some alone time again with Desiree and tells her that they have a little secret, Desiree has no idea what he is talking about then he says, the secret is that they have kissed. The rest of guys witnessed the whole thing and they are even more pissed at Ben.

Mikey T. and a few of the guys call Ben out for stealing Desiree away from the other guys. Brian decides to get away from the gossiping so he heads over to Desiree, picks her up and takes her away for some quiet time. She asks him about past relationships and he tells her about the last one, he claims they both were not ready at that time.

Time for the Rose Ceremony and Chris makes mention of the fact that there is already a lot of drama in the house. Rose Ceremony Eliminations: Will Smith, Robert Graham, and Nick Mucci. All three men are heart broken and feel a pit right in their stomach.

Next week there is going to be a fight and an ex-girlfriend of one of the guys showing up on the show, you won’t want to miss it.