The Bachelorette 2013 Episode 3 Sneak Peek Preview & Spoilers: A Surprise Visit from a Girlfriend! 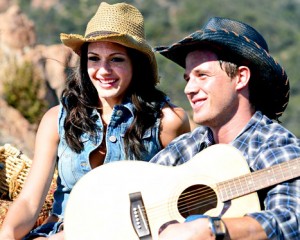 We’re only approaching Week 3 on The Bachelorette and single dad Ben from Texas has already ruffled feathers and probably caused more confusion for our lovely Desiree Hartsock! There are two ways of looking at him bringing his son on to the show: he was being manipulative, trying to win over Desiree with an adorable kid; or, this was him just bringing the kid to show a part of him to her. However, is this any different than Bachelor Jason Mesnick bringing his son on the show?

We are just beginning Desiree Hartsock’s love journey and on the June 10 episode, it’s about to get juicy–just what we expect from our reality television. So, what happens when this Bachelorette gets to know more about her guys? Well, some of it’s good, some of it’s troubling, and some of it is downright crazy.

Desiree will have two group dates and one individual date. The first group date takes 10 guys to a dodge ball competition, and one guy will get additional time with Desiree. The blue team has Brad, Ben, Zack, Brian and Drew while the red team has Brooks, Brandon, Chris, Mikey and Michael. Brooks Forester injures his finger and he had to be pulled from the game and taken away in an ambulance. On the other group date the guys learn cowboy stunts. This date includes Zak, James, Juan Pablo, Bryden and Dan. Let’s all watch to see who the winners are of the group dates and individual date?

On next week’s episode, one of the guys (Brian) might have a girlfriend (Stephanie Larimore)! You’ve probably seen the promo: someone’s girlfriend shows up after hearing her man is on The Bachelorette. But is it real, or just an actor showing up to give Des a taste of her own Bachelor Season 17 medicine? Apparently, Brian told her he just needed a break from their relationship and lied about going on the show and I can’t wait to see that scene as it is going to be interesting for us the viewers. We can sure bet that ABC is definitely going to make this a big part of the show for the drama that we all love.

Do you believe Ben when he says he didn’t want to hurt anybody by bringing his son on the show? Will Brian be going home thanks to the girlfriend confrontation? Alas, for a few guys, the journey ends here. Share your thoughts on who will be eliminated during ABC’s The Bachelorette 2013 episode 3?