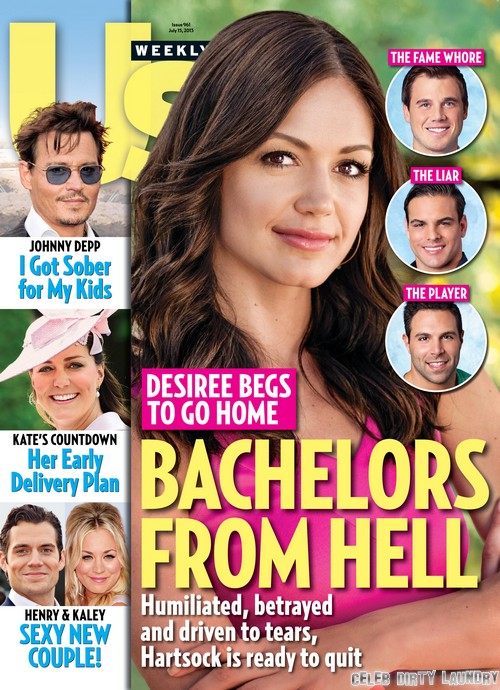 The Bachelorette’s Desiree Hartsock is ready to quit The Bachelorette after most of the contestants on the show ended up being lying, deceitful, or fame hungry.

According to the new weekly tabloid cover from US Weekly, Desiree was incredibly close to quitting the Bachelorette after she realized that she couldn’t trust most of the men. Desiree apparently learned that Brian Jarosinski had a girlfriend back home, Bryden Vukasin dumped her and ‘fled the show’ after just a few days, and James Case, Mikey Tenerelli, and Ben Scott all ‘bragged’ about how the show would make them famous and make it easier for them to pick up women.

According to an insider from the show, Desiree was heartbroken, adding, “There were several points where she said, ‘I want to go home.’ She thought, What else is going to happen?”

I just want to say – really? Is this that surprising? You’re on a freaking national TV dating show, and you think the guys will all be pure-hearted and looking for love? And this isn’t even Desiree’s first exposure to a dating reality show, considering that she was almost chosen for Sean Lowe on the Bachelor. Ridiculous.

There are also other juicy tidbits of gossip on the cover of US Weekly, including a report on how Kim Kardashian and Kanye West are choosing to reveal their daughter, North West. Apparently, Kanye’s running tight ship on the reveal, and he’s not telling anyone how he’s doing it, including Kim and the rest of the Kardashian family.

Finally, the cover reveals another big news item that’s been dominating headlines all week: Henry Cavill and Kaley Cuoco’s relationship. Apparently, Kaley and Henry ‘crossed paths’ at a Hollywood party [maybe the Spike Guys Choice Awards?] and have been dating for the PAST MONTH [that’s news to us]. For the past month?! Since Henry’s been on the promotional tour for Man of Steel during the last month, I’m wondering how he’s been ‘dating’ her. Has she been hiding in his suitcases? An insider even adds that Henry was ‘nervous’ when he first met Kaley because he ‘always’ wanted to date her. It still read like a PR relationship to me, but let’s see what else the report says when it comes out in full.