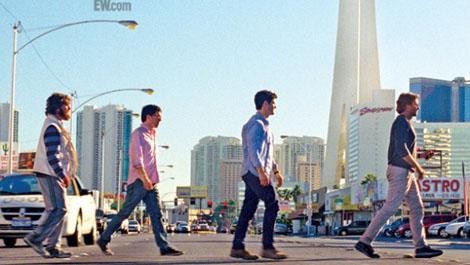 The Wolf Pack is back to complete the trilogy! Bradley Cooper, Ed Helms, Justin Bartha and Zach Galifianakis are reprising their roles for the third and final installment of The Hangover franchise. The new trailer was just released and slowly but surely we’re beginning to get a feel for what this one’s all about. Surprise, surprise it doesn’t involve a wedding or a bachelor party. At least, I don’t think it does. They could slip one in there somewhere I’m sure!

Sadly enough it starts out with a funeral. Alan’s dad dies and he goes off his meds in his grief leading Phil, Doug and Stu to come up with a plan to take him to a rehab facility. Do they manage to get there? Of course not! Doug gets kidnapped by John Goodman somewhere along the way all because Mr. Chow (played by Ken Jeung) owes him some money and John Goodman needs the Wolf Pack to find him.

Then we get some shots in Mexico and finally the crew returns to Vegas giving the trilogy the complete circle. Is it just me or is there a lot of Mr. Chow in this movie? I think I even caught some Heather Graham which is kinda cool. I missed her in the second one. I missed a lot in the second one actually because I never finished it. I tried like a hundred time but I just couldn’t get through it. I might have  a chance with this one though. It actually looks pretty good. What do you think? Check out The Hangover Part III trailer below. Does it have a chance of bringing the funny like the first film or are they continuing to ruin the memory of the original with all these sequels?