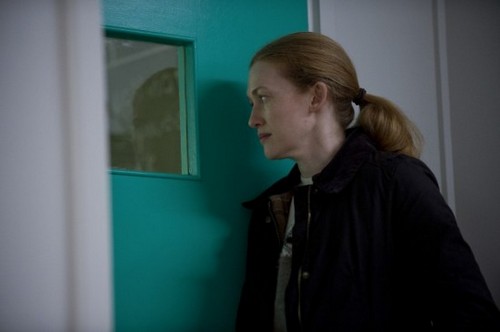 THE KILLING continues tonight on AMC and it is the penultimate episode already. On tonight’s episode called, “Reckoning”  Twitch and Lyric find their dream home. If you want to catch up before tonight’s episode, you can read our full and detailed recap, right here.

On last week’s show the investigation reached a fever pitch when Sarah went missing. Bullet made a choice to save Lyric and learned a dark secret.  Seward’s was running out of time, and soon, it would not matter who thought he’s innocent.

On tonight’s episode the hunt for the pornographer leads to a horrifying revelation and Holder looks for someone to blame. Twitch and Lyric find their dream home.  We are quickly racing to the finale since there only 10 episodes in season 3 with the penultimate episode tonight.

We will be live blogging The Killing Episode 9 beginning tonight at 9PM EST.  so make sure to come back to this spot and watch the show with us. Make sure to refresh often so you get the most current info!  While you wait for the recap, check out a sneak peek of tonight’s episode below!

The show begins with Danette putting flyers out on cars with Callie’s face on them. After hearing a noise she goes to her trailer thinking it is Callie only to find Joe there.

Holder and Sarah wait while psychologist determine if Adrian is mentally stable enough to be considered a probable witness. They chat while wait talking about how Adrian saw the man who killed his mom. Sarah gets a call that Joe showed up at Danette’s. At the trailer Sarah is able to get in out of Danette that Joe took camping and fishing stuff as well as her car with chains in it. Linden probes more about a cabin or where he might have gone. Holder and Sarah alert boarder patrol as they head to look for Joe. They head to Danette’s old storage area to find maps of where Joe used to camp and fish.

At the prison Ray places a call for Sarah. Francis overhears him and the two start a yelling match. The guards break it up before anything happens.

Danette’s storage areas to be pull of junk. But the two make an interesting discovery Joe has been staying there. After finding a cigarette but and an alarm goes off they realize Joe is in the building. He attacks Sarah, who calls out for Holder. Joe is smacking her around when Holder comes running in to save the day. The two men are fighting when Sarah gets up and kicks the crap out of him.

While going over all the evidence in the storage a box of his key rings. Sarah looks in the box and recognizes one of the rings. Meanwhile Holder finds Mills cab downstairs and thinks there is a dead body in the trunk. Sarah runs to tell him not to open it he does and finds Bullets body.

At the police station they learn Bullet has been dead for 12-years while Joe is in custody. Joe meanwhile won’t speak to anyone but his girlfriend. The police work to identify all the rings with families of missing girls. Sarah notices there is no blue ring in there, Callie’s ring.

Twitch breaks the news to Lyric about Bullet.

Danette visits Joe looking for Callie. He swears he didn’t do anything and says Callie was high and jumped out of his cab when he tried to help her. Joe tells Danette to get him a lawyer so they can find Callie. Danette reveals she talked to his mothers and knows what he did to those kids. His mother has disowned him. Joe breaks down as Danette talks about what he did to those little girls. He tries to explain that they girls came to him and that it is not wrong. He recounts his side of things.

Sarah talks to Adrian about the night his mom was killed. She promises him no one will hurt him. He finally says yes and that a man had a knife and hurt his mom. Adrian admits it was late and he hid in a closet. He saw the man because of the Christmas tree lights. Sarah shoes him a group of photos and he picks out the man who hurt his mom, which is Joseph Mills

There is a press conference about Joe Mills.

Danette runs into Sarah at the police station and recounts her relationship with Joe, she thought he was a good one. When Danette says Joe got Callie a doll for Christmas before he went to Alaska. Sarah realizes that Joe could not have killed Adrian’s moms.

Back at the prison Ray looses it asking for the phone making noise for no reason. The guard makes it clear no one is coming for Ray.

Twitch shows Lyric the apartment he got for them. She is thrilled they have their own place. He wants to be with her over going to L.A.

Holder has a hard time processing Bullets death. Sarah goes to talk to him even though he does not want company. She assures him that what happened is not his fault. Sarah shares with him that Adrian. Holder feels guilty about not picking up the phone when Bullet called. Sarah tries to console him as he breaks down.

During his yard time Ray reveals to another inmate that he shouldn’t have trusted Sarah. He also talks a little bit about his son and what it was like when his son was born. The inmate talks to Ray about God being with him. Ray prays to God for help.

Holder goes to see Bullet’s body and learns that Bullet the station a bunch of times the night she died but the calls were never logged. He goes to the lieutenants and starts punching him with his family around.

Sarah stares at the board with all the missing girls faces on it as they try to match the rings to the girls. There are four rings left over. She is having trouble with the fact that there is not connection to Patricia and Mills. Now that Mills has been caught Sarah has to decided if she should stay on or not.

The show ends with montages of Sarah, Holder and Ray all thinking.