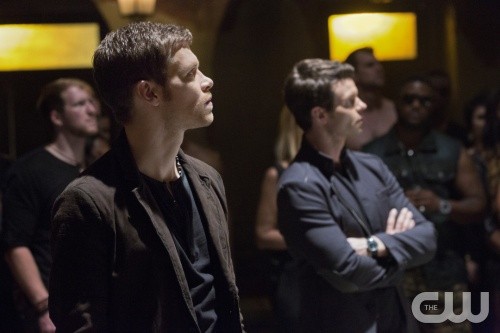 On episode 7 of THE ORIGINALS called, “Bloodletting”  Marcel,is having a fight night. The prize is a daylight ring. A guy and a girl start things off . The guy hits the girl and you assume she is going down but she manages to get the upper hand. Marcel is congratulating her when Klaus shows up with Elijah and snaps her neck. They demand the return of Haley. Marcel doesn’t have her and they are free to look around if they don’t believe him.

Marcel really doesn’t have her. Tyler does and he has her tied up in the back of a truck. Haley is kicking out windows and calling Tyler all kinds of names. He pulls the car over picks her up and walks away with her.

Klaus tells Marcel since he sired him he is going to do him a solid and give him a witch to do a locater spell for him. Marcel gives him Sabine.

Tyler is holding Haley and child hostage in a rick iguanas cabin in the bayou. Tyler wants to know why she is shacking up with Klaus. Haley tells him it’s a long story. She notices people in the woods. Tyler tells,her they keep their distance because of how the vampires treat them.

Sabine does her spell and finds Haley. Klaus and Elijah head out to get her.

Marcel,finds Joshua and tells him he needs to learn how to play with others. Joshua tells him he is cool chilling by himself. Marcel tells,him he knows he is in Klaus’s pocket.

Meanwhile out in the bayou Klaus and Elijah are having a verbal throw down. Klaus seems to think Elijah has a thing for Haley, I agree. Elijah tells klaus that Haley is more than a incubator. Klaus picks up Tyler’s scent he tells Elijah that Tyler was his first hybrid sire and that he is their to get even with him for killing his mother. Elijah is afraid Tyler will harm Haley to get even. Klaus thinks Elijah wants to bang her and tells him he should have a sample. Elijah is grosses out by his crudeness. Klaus bolts.

Davina is drawing when Marcel comes in with a bag full of Joshua. Marcel wants her to wipe his memory clean so he will be free of Klaus. Davina tells Joshua that it will hurt. Joshua tells her to do it anyway.

Tyler has some other wolfs hold Haley down while he sticks a syringe in her stomach and suck some of her blood out of it. He then jams it in a wolfs neck whose neck he then breaks. Tyler is making his own hybrid…..interesting.

Marcel sees Rebekah and then ask her why she is still in town. She ask him where Haley is but starts kicking his ass before he can answer. Rebekah thinks that Klaus will put two and two together and figure out Marcel followed her back home. Marcel tells her he would never do that to her. Rebekah tells him he is a liar just like Klaus and the dare a him to prove her wrong. Marcel accepts her dare.

Tyler drags the guy out of sight. Haley realizes what Tyler is doing. Tyler tells her that the wolfs would love to be the superior species. He tells her klaus will just use her and the baby to make more hybrids and take over New Orleans. His hybrid comes to life and he cuts Haley and lets him feed on her. His hybrid freaks and runs out the door screaming. Haley grabs the knife Tyler used on her in all the chaos.

Joshua is screaming. Dabs a tells him he needs to think of something, anything but Klaus. Joshua focuses on music.

Tyler comes back in and Haley tells him to protect her and the baby from Klaus. Tyler has other ideas and comes at her with a knife. Haley stakes him. The hybrid comes back in and attempts to protect Haley but Tyler rips his heart out. Haley takes off into the woods and Elijah finds her. They hold each other tightly. Elijah wants to take her home. Haley needs to tell him something about the baby.

Tyler is running around telling for Haley and he gets Klaus instead. Klaus can’t believe Tyler would do those things to a pregnant woman and ask him want Caroline would think. Klaus tells,him he is going to ask when he calls to tell,her Tyler got dusted. Tyler take a off and Klaus follows.

Marcel and Rebekah are in his punishment garden. He shows her. A sketch and tells that the garden was the foundation for a house he was building her but that he never finished it because she left. Rebekah tells him for 90 of those years she had a dagger in her heart and was stuffed in a box. Marcel,tells her she needs to make a choice. Does she want to stay with the brother who hates to see her happy or be with the man who wants to give her everything. Rebekah tells him Klaus will just kill them. Marcel,counters by saying not of they kill Klaus first. So I guess that whole can’t kill your maker rule doesn’t apply.

Haley tells Elijah how Klaus will just use her and the baby to his benefit. Elijah promises her that he will never let that happen.Elijah tells her he will protect her even if it has to be from Klaus.

Klaus is looking for Tyler when he pops out and stakes him. Klaus tells Tyler how dare he. Tyler responds by stabbing him again. They push each other a couple of times and in between insults Klaus reaches in and grabs Tyler’s heart to rip it out. Tyler tells him to do it. Klaus changes his mind and doesn’t he tells Tyler he wants him to live everyday feeling miserable and knowing his existence is in Klaus’s hands. He takes it one step further and makes Tyler live with the fact that he means nothing to Klaus.

Rebekah tells Marcel that he can’t kill Klaus because he would die as well. So the rule does apply. Marcel,then days they will just bury him in his garden. Rebekah says that won’t work either and she can’t believe he is willing to die for her.
Elijah and Haley find Klaus shoving the hybrids body out of the shack that misguided revenge built. Klaus wants to know what the deuce is up with the hybrid. It turns in a tit for tat battle pretty quickly and Klaus decides that they all see him as nothing but a bastard. He grabs Elijah and gives him the parting gift of a bite.

Davina is done wiping klaus from Joshua’s mind and he tells her he can feel the difference. Davina tells him she is also supposed to make hi forget that he ever saw her. Through some persuasion and a pinky swear Joshua gets to remember Davina.

Klaus goes home and finds Rebekah there. He explains how Haley turned Elijah against him. Klaus informs Rebekah that with Elijah gone she will have to be his number two in the plan to take down Marcel.

Tyler goes to Marcel and tells him that Haley’s baby will spell extinction of the vampires. Marcel is not happy.

If you want a sneak peek video & synopsis of next week’s episode, “The River in Reverse” check out the preview of episode 8 below!

THE FIRST BATTLE OF THE WAR — Rebekah (Claire Holt), facing a difficult decision, turns to Father Kieran (guest star Todd Stashwick) for guidance. Elijah (Daniel Gillies) struggles with the consequences of a recent fallout with Klaus (Joseph Morgan). Hayley (Phoebe Tonkin) remains by his side but is soon drawn away by a mysterious figure who sheds some light on her past. Meanwhile, a frustrated Cami (Leah Pipes) struggles to make sense of a cryptic message she’s come across. Finally, when an unsuspecting Marcel (Charles Michael Davis) uncovers some upsetting information involving Klaus, a confrontation ends in a surprising twist. Jesse Warn directed the episode written by Declan de Barra and Julie Plec (#108).