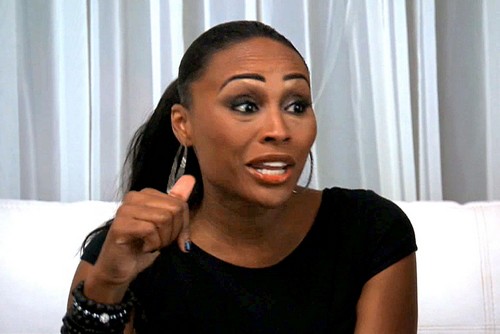 Tonight on Bravo is the season 5, nineteenth episode of THE REAL HOUSEWIVES OF ATLANTA and tonight’s episode is called “Donktabulous!.” On tonight’s show Phaedra and Kenya are set to battle it out: booty vs. booty.  We did and we recapped it here for you.

On last week’s show after being teased by the women in Vegas about whether or not she’s pregnant, Porsha waits to take the test until she’s home in Atlanta with Kordell. NeNe travels to NYC for a whirlwind press tour to promote her sitcom, while Kandi’s stretched to the breaking point with renovations of both her business and her home. Kenya thought she had extracted Walter from her life, but the men keep inviting him around; the talk soon turns ugly and rumors begin to fly.

On tonight’s show Kandi’s housewarming party is supposed to be a joyous occasion, but Kenya brings drama after finding out that her ex Walter is there; Cynthia has to intervene because Kenya may have taken things too far. Meanwhile, NeNe and Gregg settle deeper into their rekindled relationship.

Kandi holds her first Bedroom Kandi sales gathering, and the women are shocked to see how big her empire has grown. Porsha seeks the advice of a therapist concerning her relationship with Kordell, and Phaedra and Kenya are set to battle it out: Booty vs. Booty with their upcoming workout videos.

Tonight’s episode is going to be another drama packed one, which you won’t want to miss. So be sure to tune in for our live coverage of Bravos’ The Real Housewives of Atlanta Season 5 episode 19— tonight at 8PM EST! While you wait for our recap, hit the comments and let us know how excited you are about the new episode of RHOA tonight.

Tonight at Kandi’s housewarming party, there is tension boiling at the party. Someone, probably one of the husbands invited Walter, Kenya’s ex to the party. Upon hearing her “stalker”(her term) is at the party, she immediately storms off and has a mini meltdown at the parking space before she drives off. But what is really interesting about Walter showing up yet again at Kenya assured party was that he told Apollo and Phaedra a while ago.

While over at Nene’s, Nene and her ex-husband/ new boyfriend(?) are trying to figure a living arrangement for their son and eventually for each other. There is some confusion on how divorce dating is going work with Nene is working in LA but their family base is in Atlanta.

In the meantime, Cynthia confronts Kenya about all the drama she brings whenever Walter makes an appearance. “You’re too beautiful, too smart” is what Cynthia is trying to tell Kenya. Yet in Kenya’s case she feels a girlfriend is attacking her for not getting over a relationship quick enough. The same man who saw her stripped naked and continued to ignore her. The same man she moved to Atlanta for in order for him to think marriage. Maybe Cynthia needs to think about that and until she does it’s going to be hard for Kenya to get over that blow to her pride. And she especially doesn’t need the husbands inviting along her ex just so they could watch the drama.

Porsha is at her therapist office where she talks about miscarriage at four months. Despite what she’s always stated about her marriage before, she reveals that there are cracks. Specifically when she feels that Kordell doesn’t understand how much her miscarriage affected her. When she stated that they are things you can tell your therapist but not your husband, she acknowledged that they need to communicate better and decides to bring him to her next session.

Nene and Cynthia meet up and enjoy some wine. They apparently heard red wine is good for weight loss. Meanwhile Cynthia questions Nene about Gregg and tells her how she seems to be very happy.

Kandi is enjoying her time with her boyfriend and wondering if her new relationship is hurting the one she has with her mother. When she drops the news that eventually her mother will live with her, it opens up the discussion towards marriage. Will Ty ask her to marry him? How do you feel about a surrogate? And last but least; how do you feel about pre-nups? She was after all recently honored at an event for her sex toys line. It’s all the fun conversations to have when in bed with your man. Luckily (for her) he seems to be fine with prenups and her mother eventually moving in…way down the road.

Back to the most likely reason why Phaedra didn’t give an earlier Walter warning, she and Kenya are simultaneously making work out videos. Though Phaedra sees it as healthy completion, Kenya claws come out as she talks about her body being proof for her video while on the other Phaedra’s is a good advertisement for McDonald’s. So the war of Donkey Booty Vs. Stallion Booty begins.
Round One goes to Kenya. Her video seems to be going more thought out and detailed than Phaedra and Apollo’s false starts and early nerves.

At a romantic setting, Nene and Gregg are discussing their relationship (when she finally puts down her phone). They both talk about their regrets and the shock of their divorce when Gregg says he doesn’t want his family to be a statistic. Right before he proposes to her. Thrown but not down, Nene wants a proper proposal and wants Gregg to go down on one knee. He doesn’t but she still accepts the proposal. All of their laughter during and after proposal make it obvious they still very much love each other.

According to next week promo the good will doesn’t spread, and the husbands Kordell and Peter seem to go at it? Peter fought with Apollo previously and now it’s Kordell’s turn. Does Peter just like to cause drama? Yes. Will the fight get physical? Please!!!

More importantly how will this affect the housewives? Let’s see what happen next week!