The Swon Brothers Voted Off The Voice Season 4 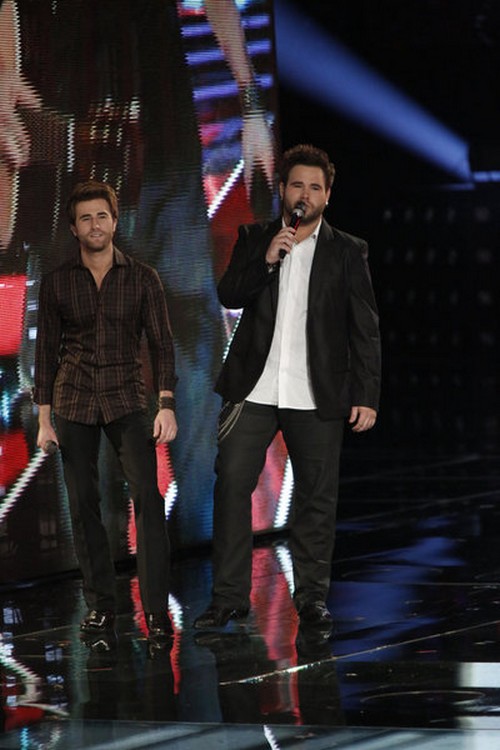 The Swon Brothers who are comprised of Zachery Blue “Zach” Swon and Colton Hunter Swon from Muskogee, Oklahoma was voted off THE VOICE tonight after weeks and weeks of competition.  The two were the first duo in the reality show’s history to make it to the final three.

First up tonight is The Swon Brothers performing, I Can’t Tell You Why by the Eagles [VIDEO HERE] – Judges Comments: Usher said, “It is great you guys finally found the girl part of your life.  The only thing missing was the third Bee Gee, great to see you guys evolving.  Hope it does well for you.”  Shakira said, “I am a fan, I thought it was a very good idea for you to do this song, this new you.  It quite suits you.  I think what you have that is so special is that you have Universal appeal.”  Adam Levine said, “I totally am flattered, they did this song for me because I am a huge Eagle fan.  You guys did a great job”  Blake Shelton said, “I seriously think this is the best season of the Voice so far.  You are constantly evolving and it keeps expanding your fans.  Great job!”

The Swon Brothers singing Danny’s Song by Loggins and Messina [VIDEO HERE] – Judges comments: Usher said, “The fact that they personalize it makes it define them.  You guys did that song such justice.  What an incredible rendition, amazing.”  Adam said, “I got lost in.  Everything that Usher said.  That is such as classic record, and you continued the legacy of an old song.  You should be proud.”  Blake said, “That feels like that song could be on radio right now.  You took that song and you reinvented it, good for you guys.  Your harmonies get better every time your perform it.”

What did you think of the Swon Brother’s journey?  Did you think they deserved to be voted off?  Were you hoping for them to win?  Hit the comments and let us know your thoughts!