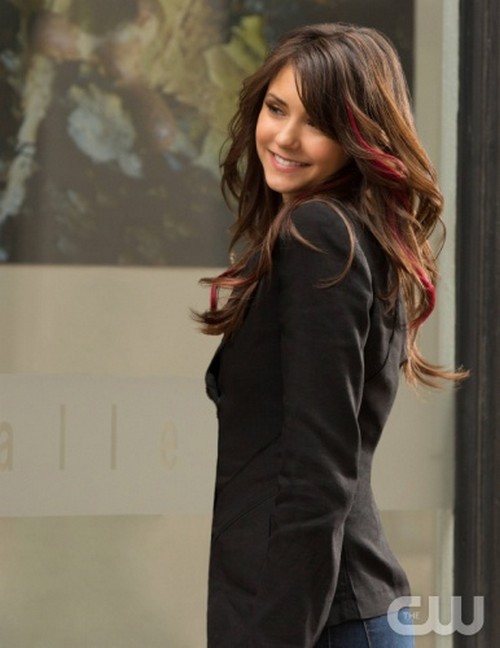 The waiting sure is long between episodes of our favorite show THE VAMPIRE DIARIES.  Tonight’s show is called, “Because The Night,” pull up your chair and get ready because Damon, Stefan, Elena and the gang are back.  On tonight’s show flashbacks to Damon’s life in 1970s New York/The Band Dead Sara performs tonight.  Did you watch last week’s episode?  We did, and you can get up to date before tonight’s show, here!

On the last episode Elena’s new outlook had everyone concerned, leading Stefan and Damon to agree that going back to the normal routine of high school would be the best thing for her. Caroline was pleasantly surprised when Elena decided to rejoin the cheerleading squad, but her pleasure turns to shock when Elena’s behavior proves dangerous and she proceeded to eat the other team. Not giving up on their search for the cure, Damon and Rebekah worked together until his unwanted advice caught her off-guard.

On tonight’s show realizing that Elena needs some time away from Mystic Falls, Damon takes her to New York City, where he lived and partied hard in the 1970s. When Rebekah also shows up in New York, she’s impressed with Elena’s secret agenda. Flashbacks reveal Damon’s hedonistic life in the underground club scene and a complicated encounter with Lexi (guest star Arielle Kebbel). 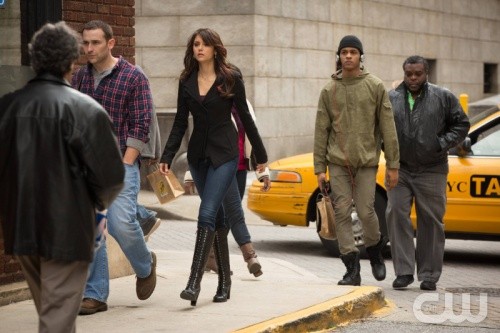 Meanwhile, Caroline and Stefan try to convince Klaus that it would be in his own best interest to help them track Silas down, and Bonnie struggles to keep her grasp on reality and do the right thing. Garreth Stover directed the episode written by Brian Young & Charlie Charbonneau.

The Vampire Diaries Season 4 episode 17 “Because The Night” airs at 8PM tonight on the CW and we will be live blogging it will all the up-to-the-minutes. So come back to this spot and spend the evening with us enjoying the show! Make sure to refresh often to get the most current update!

Flashback – A couple is walking down the street and they come up on what seems to be a dead man on the ground. The woman instantly appears on the ground with a bite in her neck and the man she was with sees Damon walking up to him. Damon bites him and leaves them both on the ground as he walks away.

Damon and Elena are walking the streets of New York City on their way to lunch. Stefan is questioning Damon about why they’re in New York. Damon tells him that they are after Katherine and following a lead. Caroline is cleaning up some trash from the party and Klaus joins her. He is questioning her about the whereabouts of Tyler while Caroline continues to drink. She tells him that she hates him for driving Tyler away.

Stefan walks in stating that he invited Klaus and that they think Silas is in Mystic Falls. Shane and Bonnie are at her home talking about Silas and he taunts her with bringing Jeremy back.

Klaus and Stefan are brainstorming about the whereabouts of Silas and his motives for being in Mystic Falls. If Silas destroys the scion every supernatural being with come back to life. Stefan states that Shane only needs one more massacre to complete his ritual.

Damon and Elaina are in a bar scoping out a scene to feed. A flashback of the bar they they’re in, called Billy’s, shows Damon drinking and scoping out a woman to feed on. Lexi finds Damon and it goes back to the present where Rebekah speeds in front of Elaina and Damon. Rebekah is holding Damon down on the bar and let’s him go as she tells Elena that they are both looking for the cure, which Elena didn’t know.

The scene flashes back to Lexi and Damon talking behind the bar as she questions him about him turning off his mortality. She states that she’s staying with him to try and help him because she told Stefan that she would.

Back in the present, Damon walks away to get a drink while Rebekah and Elena talk about them finding the cure and Elena knows that Damon is somewhat “playing” her and says she just has to find the cure first. Stefan, Caroline and Klaus are searching for clues to Silas’ location.

Klaus is taunting Stefan with Damon’s real motives for being in New York with Elena. Caroline finds a book explaining the type of expression magic that Shane and Bonnie have been using for Silas.

The last step in the process is to kill witches.  Shane tells Bonnie this to her surprise. Shane tells Bonnie that they have to convince her father to help him help Bonnie. He says he wants Shane out of the house while he’s trying to plead with him to help her find live witches with her mother for their ritual.

Rebekah, Elena and Damon are enjoying a drink together talking about Lexi trying to help him get his humanity back. The bar is full now. Flashes back to Lexi and Damon. She is trying to help him enjoy life again which he is having a hard time adjusting to. Elaina tells Damon that she is hungry and tells her to pick one. Flashes back to Lexia and Damon feeding on a woman together.

Flashes back to the present to Damon seeing Elena and Rebekah share a woman in the same way. Bonnie meets with a witch named Asia who was a friend of her mother’s. She tried to dissuade her from expression while Bonnie admits that she is a little afraid of her power. 11 more witches come out of the woods to attempt to cleanse her. Elena and Rebekah are still feeding then they go to find where Damon went.

Rebekah offers to work with Elena to find the cure as Elena questions her motives. Rebekah says she wants the cure so she can have a family someday and Elena shows more of her lack of humanity.

Caroline and Klaus are going over a drawing that she’s doing trying to locate the scene of the next massacre and Klaus corrects her picture as they look at each other intimately until Stefan walks in. Bonnie is in the process of being cleansed by the group of witches in the woods. She tries to fight it as the other witches add more power to the ritual. Bonnie begins to scream from the pain of it and Asia is saying they need more power to finish.

Stefan and Damon are on the phone talking about Shane and the the progress off his search for the cure. Damon is trying to find Katherine from a lead at Billy’s. He finds a P.O. Box in her name and tells Stefan that he needs to get back to them before they suspect anything. Elena walks in on him at the end of the conversation and they leave. Flashback to Lexi and Damon talking about his history with Katherine. She’s trying to get him to remember his feelings for her to help him. She reminds him that Stefan killed his father and was on the run and he asked Lexi to help him which is why she’s helping him because they both care bout Damon.

Damon tells her that Katherine isn’t the woman that he cares about while he looks at her intimately and tells her that she worked for him to turn his humanity back and they begin to kiss. Damon is telling Elena this back at Billy’s. Elaina grabs a bottle from behind the bar and tells him the she’s going to the roof because she wants to hear the rest of the story. Rebekah is left in the bar alone not looking happy.

Caroline and Klaus are walking through the words attempting to track Bonny. Caroline subtly tells Klaus that she knos he can never change and isn’t worth the effort. Stefan find Bonny and the witches trying to cleanse Bonnie and tells her that she is under Silas’ control by brainwash and was sent there to kill them. She casts a spell on him to remove him from the ritual area and he walks away from the circle in pain.

Klaus, Caroline and Stefan are on the edge of the witches circle and Klaus states that the only way to stop Silas is to let them kill Bonnie. Caroline speeds behind Asia and stabs her in the back as she realizes the performed the last slaughter herself. Elena and Damon are on the roof talking about turgning her emotions back on and staying in New York and she says that it might be an excuse to spend more time with him.

Elena tells him again that they both want each other and not to fight it by trying to take the high road. Elaina reaches in his back pocket as they kiss and he catches and reprimands her for it. Flashback shows Lexi waking up in the sun next to Damon. She tries to escape into the stairwell but Damon has locked it and tells her that it’s payback for the last 6 months. His humanity is not back on and he is not like Stefan needing to be saved. He leaves her stranded on the roof. Damon telling Elena this on the rooftop and reminds her that one day all the bad things you do will eventually catch up to you. Damon states it’s more of a reason to cure her because he doesn’t want her going down the path that he did. Rebekah comes up behind him and breaks his neck asking Elena if she can really handle this on her own.

Stefan is sitting next to Bonnie while she is in bed and asks her how she is. She asks what he’s doing there and they find out that she doesn’t remember anything from before she left the island in the cave with Jeremy, Silas and the cure. Silas may have been hiding in Bonnie. Klaus and Caroline know that she finished the last massacre and that Silas has everything he needs now. Caroline begins to cry about what she did and Klaus comforts her and tells her to find someone less terrible that can relate to her.

Klaus turns around to find Silas in Shane’s body. Damon wakes up on the roof alone in the morning and is talking to Elena on the phone. Her and Rebekah drive off and wish him the best. Damon tells Stefan what happened. He tells Stefan that Elena took the lead that he had on Katherine.

Stefan tells Damon that he didn’t stop the massacre and that Silas has everything he needs but the cure. Silas tells Klaus that he needs to bring him the cure or else. Silas pulls out the White Oak stake that he found from Rebekah. Silas asks him to reconsider. Klaus charges him and misses while Silas appears behind him and stabs him with it but doesn’t kill him so he has something to remember him by then leaves.

Can’t Wait for the next episode?  – FOR SPOILERS FOR NEXT WEEK’S EPISODE GO HERE!