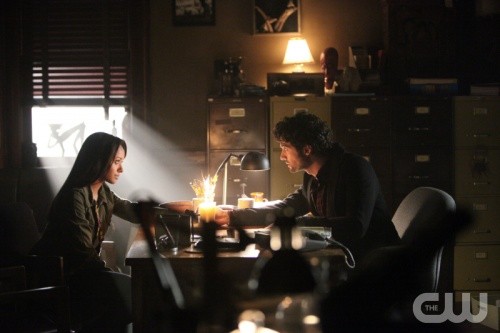 This week’s vampire diaries was fantastic as usual and left us wanting more as usual.  From the preview we have seen, next week’s episode of The Vampire Diaries called “Catch Me If You Can,” is going to be great and, as usual, we will be providing you with the juiciest, bloodiest, previews and teasers out there.

On tonight’s show opened at the memorial for Mayor Lockwood and Rebekah shows up.  Rebekah wasted no time trying to force Stefan, Elena and Caroline to answer her questions about the search for a cure, leading to a bombshell piece of information from Elena.   She admitted she slept with Damon because she loved him.  Rudy Owens accepted the role of Interim Mayor, he made it a priority to protect his daughter, Bonnie.  Bonnie was not comfortable with the role he wanted to play in her life.

Professor Shane continued to encourage Bonnie to believe in her powers, but he soon found himself in danger when he revealed too much to the wrong person. Later, Caroline did her best to comfort Tyler after a violent confrontation. Meanwhile, at the lake house, Damon and Matt train Jeremy, trying to raise his game as a hunter, but Klaus is impatient with their progress and intervenes to speed up the process.  Did you watch tonight’s show?  We did and we recapped it here for you!

Spoiler alert: If you’re one of those people who doesn’t like spoilers, stop reading now! We have some juicy spoilers for you about the season 4 episode 11 of CW’s “The Vampires Diary.”

CW Official Synopsis: A NEW DANGER — Jeremy is furious when Klaus tries to control him by putting Matt’s life in danger. Damon coaches Jeremy as he prepares to take on Klaus’ new vampires, but they find that Kol has beaten them to it. Kol makes it clear that he will stop at nothing to convince everyone to give up the search for the cure. Looking for a new ally, Rebekah reminds Stefan that they were once close friends. When Sheriff Forbes and Mayor Hopkins question Shane about his involvement in the Founders’ Council deaths, Bonnie steps in with questions of her own, and Shane’s responses push Bonnie to the edge of her powers. Elena negotiates with Klaus to keep Jeremy safe, but when danger suddenly appears from a totally unexpected enemy, Elena comes up with her own daring plan for Jeremy.

The cure is definitely on everyone’s mind.  Klaus is getting all tense because Jeremy is not finishing the tattoo as fast as he would like.  Jeremy tells Elena that Klaus is not going to stop until the tattoo is complete.  Jeremy is in the forest and his hand has been damaged and bleeding.  There is also a group of compelled vampires in the woods.  I am guessing Klaus compelled them to go and find Jeremy and Jeremy is cut so the vampires can smell the blood.  Jeremy will be forced to kill the vampires and that will finish the map on Jeremy’s arm.  Giving Klaus what he wants.  Damon tells Jeremy to, “Get his hunt on!”  In the last scene we see Jeremy sitting behind a tree and someone comes up to him.  Jeremy takes out a gun and points it.  Yikes…  Cannot wait to see the episode!

The Vampire Diaries Season 4, Episode 11 “Catch Me If You Can” airs on the CW on January 24th, 2013. Check out the preview video  & some photos from episode 11 and let us know in the comments below what you think!