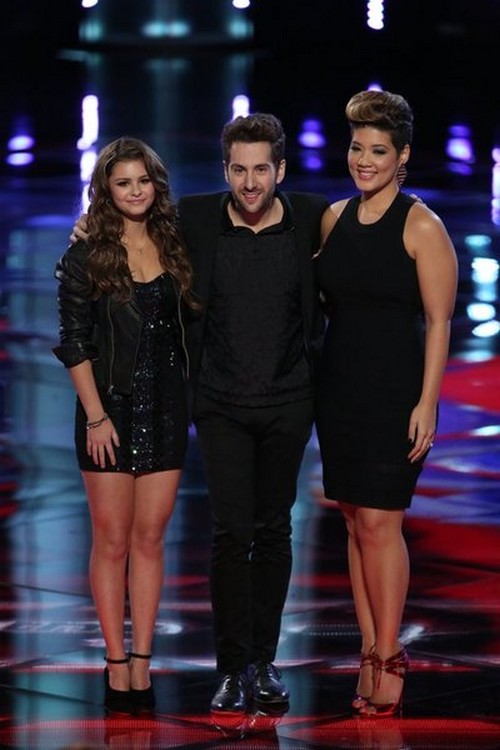 THE VOICE is one of our favorite singing reality competitions because the judges – definitely have a good time and are even quite funny. Tonight, The Voice season 5 will be returning with a new episode called, “The Final Performances.”  On tonight’s show the final three artists put it all on the line as your votes determine who will be the Season 5 champion..  In case you missed the last week’s show we have the full and detailed recap right here for you.

On last week’s show it was the toughest cut of any Voice episode ever. With this season’s talent level off the charts, any of the remaining five artists clearly had the chops and stage presence to be a finalist. But this is the toughest singing competition on TV, and tonight after the smoke clears, only three remained standing. Tessanne Chin, Jacquie Lee and Will Champlin.  This will be the most competitive final ever.

On tonight’s show the final vocalists compete for the title of the Voice. In the final phase of the competition, the remaining artists perform in front of coaches Adam Levine, Blake Shelton, CeeLo Green and Christina Aguilera during a live broadcast. One artist will be a step closer to being named “The Voice.”  Plus we will see performances from OneRepublic, Celine Dion, Ne-Yo, Lady Gaga and the coaches!

Tonight’s  “The Voice – The Final Performances”  is going to be an exciting one, which you won’t want to miss. So be sure to tune in for our live coverage of NBC’s The Voice – tonight at 8 PM EST!   While you wait for our recap, hit the comments and let us know how excited you are about the new season of The Voice.

We now see a recap of the blind auditions of Jacquie Lee, Tessanne Chin and Will Champlin; there’s also the coaches comments, reminding us this is the last time they will go against each other since the winner will be revealed tomorrow night!

We now have our coaches singing “Pour Some Sugar on Me” by Def Leppard.

The first up is Tessanne Chin with her song she did in the blind auditions which was “Try” by P!NK; Adam loves her so much and is incredibly proud to see how far she has got in this competition because he knew she’d be at the finals.

Adam says that he thinks that everything Tessanne does just draws him in and he says it’s funny being his coach because her talent is so amazing that he enjoys the process of working with her; every moment they have done has really been fun and inspirational for himself to be better and that she is one of the most loving people he has ever met. CeeLo says that Tessanne is a fan favorite and has evolved so much throughout this competition; the pressured environment has really changed her into an even better performer.

Next up is Will Champlin; Adam felt that they would both get along on a musical level and that their tastes blended really well. He is honored to have worked with him; Will Champlin is singing “Not Over You” by Gavin DeGraw.

Adam says the Will works too hard and it’s very stressful; he can’t imagine how it would be in his head and that his hard work is inspiring yet it’s exactly why he’s in the finals because he has such a strong passion for music. Adam has a ton of respect for him and is just all around impressed with how he has gotten through a lot of hurdles in the competition. Christina says that she agrees with Adam that he’s been on an amazing journey; she does see how he over thinks and is a perfectionist. She believes that he has gone through a lot of struggles and is proud of him to be in the top three.

Next up is Jacquie Lee with her blind audition song, Christina says that her voice was like a roar that captivated her and could not believe she was so young with a huge voice; she believes Jacquie can win it all. Jacquie Lee is singing “Back to Black” by Amy Winehouse

Christina says that she loves her so much and that it’s obvious; she gets so much joy seeing her perform on stage. What is amazing is that at 16 she can be so amazing; she’s glad to be on this journey with her and loved meeting her family. There is something so special inside of her; she loves how on their one on one sessions where they finish their sentences.

Next up is Tessanne Chin and Adam Levine with their duet; they are singing “Let It Be” by The Beatles. She is amazed to be this far in the competition; it’s kind of like being the person she always wanted to be and is glad to know Adam as a person and that he is great. Adam is so excited to perform this song with Tessanne; it’s an honor for him to perform with her on stage.

Next up is Jacquie Lee and Christina Aguilera and their duet; she is blown away with how amazing Jacquie has been dominating with her strong voice in the competition. Christina chose the song “We Remain” by Christina herself; the two of them have so much together and both can’t wait to get on stage and finally perform together.

Next up is Will Champlin and his duet with Adam Levine; he loves how Will is such a musician and how he’s also a song writer. Adam says that he never had parents like Will who were in music but his parents loved it a lot; he believes they come from the same cloth and that he’s looking forward to perform with him on stage. They are singing “Tiny Dancer” by Elton John.

Next up is Jacquie Lee, Tessanne Chin and Will Champlin singing “I Will Be There” by Michael Jackson.

Next up is Tessanne Chin with her last song; she used to be a back-up singer and always wanted an international career. Adam believes that her potential was out of control and believes it was not a surprise that she is in the finals; it’s exactly how he predicted it. Tessanne believes Adam has made him a better singer and performer. Tessanne is singing a song by Whitney Houston called “I Have Nothing”

Adam says he has no thoughts right now and it’s all just emotions; it’s obviously sacred ground right now with her singing Whitney’s songs. He believed that her rehearsal was flawless was so amazing; he didn’t know if he should laugh or cry with how she delivers such perfection. He believes that she nailed that song without a doubt; he has no idea where her talent ends. He believes she is the winner of the show.

Next up is Will Champlin; Adam says that he knew he was good and better than everyone else though he just doesn’t know. He was glad to have been able to steal Will back onto his team and was amazed to see him make such a comeback; Will cannot even believes he’s made it this far into the competition and is happy that America has voted him back several times. Adam gave him the song “Everything I Do, I Do For You” by Bryan Adams.

Adam says that he absolutely delivered; he considers it a major victory for him and that he has a ton of mini ones. He doesn’t care about the outcome of who wins; with all the crap Will has dealt with, that he’s already won. Blake says that Will’s good luck; being on both Adam’s and Christina’s teams has made them into the finals. He felt that his vocals were solid all the way through; he didn’t have to do anything fancy and it felt really good.

Next up is Jacquie Lee with her final song; before the voice she was just a student and is amazed with how much her life has changed. Christina says she has a presence around her that is amazing; she is so happy to have Christina as her coach since she looks up to her so much. Christina gave her the song “And I Am Telling You” by Jennifer Hudson.