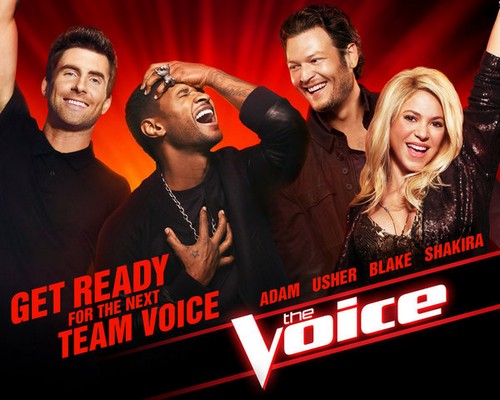 THE VOICE returns to NBC tonight with a whole new episode.  The coaches Shakira, Blake, Usher and Adam begin to trim their teams down to just four artists each. Did you watch last week’s episodes? We did and we recapped NIGHT 1 HERE, NIGHT 2 HERE.

On last night’s show the coaches return to the Voice stage, intent on making the final selections for their teams of eight. On last week’s final Battle round, six more pairs of artists faced off, with a trip to the knockouts on the line.  By the end of the evening the battle rounds were complete and the teams set, the coaches retired, ready to face a whole new set of tough choices: the knockout rounds.

On tonight’s show the competition heats up as The Voice, “knockout rounds” begin with coaches Adam Levine, Blake Shelton, Shakira and Usher’s eight strongest team members remaining from the battle rounds. In this phase of the competition the coaches pit two of their own team members against each other, but this time they find out only minutes before performing who they are up against. The artists each select their own song to perform individually, while their direct competitor watches and waits. Their coach will choose the winner and that artist will proceed to the live shows.

Tonight’s  The Voice “Season 4  The Knockouts, Part 1”  is going to be an exciting one, which you won’t want to miss. So be sure to tune in for our live coverage of NBC’s The Voice – tonight at 8PM EST!   While you wait for our recap, hit the comments and let us know how excited you are for the new season of The Voice.

RECAP: Team Adam is on stage now and after tonight, there will only be half left. The first two people to go head to head in the Knockout Round is Amber Carrington and Midas Whale. Amber has chosen to sing “I’m with you by Avril Lavigne”. Midas Whale impressed all four coaches in the Blind Auditions, they have decided to sing “Higher Ground” by Stevie Wonder.

Blake thought that Midas Whale was serious and had good moves, he says he loves Amber as much as he doesn’t like Adam. Blake gives this one to Amber. Usher says that Midas Whale did great. Shakira loved Midas Whale but she thinks that Amber won this one. Adam needs to make a decision, he loves both acts – so this is going to be a tough one. The winner of this Knock Out Round is Amber.

Team Shakira is next and the first pairing is Garrett Gardner and Tawnya Reynolds for this Knockout Round. Garrett has so much potential, he is singing “Too Close” by Alex Clare. Tawnya has had a chance to show her wild side so he she has chosen “Hell On Heels” by Pistol Annies. Garrett is up first and Shakira thinks if Tawnya is sexy and sassy, she will win this round.

Adam thinks the best think about the show is how people improve, especially Garrett. Blake thinks Tanya’s song choice was excellent. Usher loved Tawnya’s control of her voice. Shakira loved Tawnya’s badass attitude, Garrett was the underdog but since then he has grown as a person and as an artist and Shakira is proud of him. The winner of this Knock Out Round is Garrett.

Team Adam has his team on stage and it is time for his first Knockout Round. Adam chooses to pair Amy Whitcomb against Caroline Glaser, it all comes down to who delivers the best. Amy chooses to sing “House Of The Rising Sun” by the Animals. Caroline is so happy that Adam stole her, she is singing “Little Talks” by Of Monsters And Men.

Blake respects Amy for taking chances but it ended a whole lot better than it started, Caroline won this round according to Blake. Usher could hear Caroline shaky a bit, he gives this round to Amy. Adam loved both, they are opposites and that is why he paired them, Adam thinks they both did better in rehearsals. The winner of this Knock Out Round is Caroline.

Shakira’s turn for another Knockout Round and this pairing is Kris Thomas and Mary Miranda. Kris is more of a Crooner and he has choosen to sing “What A Wonderful World” by Louis Armstrong. Cuban born Mary has choosen to sing “Every Breath You Take” By The Police and it is the first time she singing English on the show. Shakira is worried about Mary, she thinks it is going to take a lot of practice from Mary.

Adam thought Chris had so much range that it was crazy, Mary won this round according to Adam. Blake is surprised to see this pairing because they are two of Shakira’s favorites, he loved Mary’s nerve to sing English and he doesn’t know which won the round. Usher felt that the Mary in last round was missing, he thinks Chris is incredible. Time for Shakira to make a decision, she thinks Chris has absorbed all the information that she has given him and she thinks Mary is a doll. The winner of this Knock Out Round is Chris.

Team Adam is up again and this time he is pairing Judith Hill and Orlando Dixon. Judith is singing “You Are Always On My Mind” by Willie Nelson and she is singing this for her grandmother that past away this month. Berkley music school graduate, Orlando is singing “All My Life” by Casey and Jojo.

Blake thinks that Judith should just punch him in the face after picking Adam – he thinks Judith wins this round. Usher also thinks Judith won this round, her voice rang out. Shakira thinks there is no surprise on how good Judith was tonight. Adam is proud of Orlando but Judith’s song choice was stellar. The winner of this Knock Out Round is Judith.

Shakira’s next Knockout pairing is Karina Iglesias and Monique Abaddie. Karina is going to go back to her rocking roots by singing “Are You Going To Go My Way” by Lenny Kravitz. Monique is going to sing “The Power of Love” by Celine Dion and Shakira thinks she needs to watch her pitch with this song.

Adam thinks it is tough, Karina didn’t have the best song choice and Monique had some technical problems, he would pick Karina as the winner of this round. Blake would give this round to Monique. Usher wishes Karina had sang a more energetic song. Shakira has two decide between her two power house vocalists. The winner of this Knock Out Round is Karina.

Adam’s final pairing for the night are Warren Stone and Sarah Simmons. Warren has chosen to sing “I’ve Died In Your Arms Tonight” by Cutting Crew because he wanted to mix his own arrangement with the big emotion of this song. Sarah chooses to sing “Wild Horses” by the Rolling Stones because her dad share it with her when she was little.

Blake thought this was the best he has ever heard Warren sing and Sarah was amazing, he gives it to Sarah. Usher loved what Sarah did with her voice and gives this round to her. Shakira loved Warren more. The winner of this Knock Out Round is Sarah.

The final pairing for the night is from Team Shakira with Sasha Allen and  Shawna P. Sasha is singing “At Last” by Etta James and Shakira advises her to showcase her own beauty with the beauty of this song. Shawna is singing “Baby I’m Amazed” by Paul McCartney that shows off her gospel sound.

Adam thought that he was a dumb idiot when he heard how incredible Sasha was tonight, he also like Shawna but thought she should unleash a little more. Blake thinks this is the best Knock Out Round so far tonight. Usher thinks Sasha’s performance needed to have a little more runs and should have kept to who she is as a performer. The winner of this Knock Out Round is Sasha.