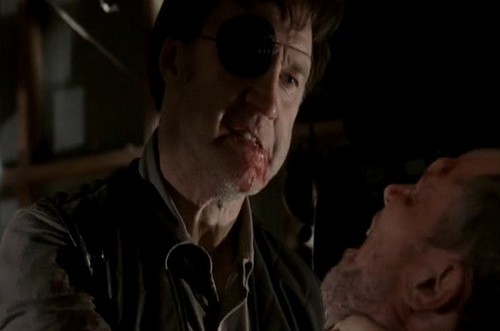 THE WALKING DEAD is down to  its season finale next week and all reports shock that fans are going to be shocked after the finale episode.  The Governor and the Rick’s gang at the prison are going to finally face off.   We have a sneak peek video and some insight for you below on what is going on next week below.

On tonight’s show Rick tells Hershel and Daryl (the inner circle) the only way to stop the war is to give Michonne to The Governor.  Daryl does not want to do it, but Rick tells him they avoid fighting and no one else dies.  Rick goes to talk to Merle to try to get his help – he tells him what the Governor wants. Merle is shocked Rick would give Michonne up and he does not believe Rick can do it.  Daryl tries to connect with his brother Merle with no success. Rick, as Merle predicted comes to Hershel and tells him he cannot give Michonne up.  Unbeknownst to him Merle decides to take matters into his own hand and takes Michonne to the Governor.   Rick and Daryl realizes that Merle took Michonne and Daryl goes after them.  To find out all the rest of tonight’s action check check out our full and detailed recap HERE!

Spoiler alert: If you’re one of those people who doesn’t like spoilers, stop reading now! We have some juicy spoilers for you about the season 3 episode 16 Finale of AMC’s “The Walking Dead.”

AMC Official Synopsis:  Rick and the others consider the defense of the prison as the Governor’s impending attack looms.

On next week’s show the war begins the governor convinces the people at Woodbury that they have to get rid of Rick and his gang at the prison once and for all.  The Governor is dangerous, he is a man who does not care anymore.

The Governor still has Andrea tied up in his torture room and he tells her life has changed, you either kill or you die.  Andrea begs him to stop it, but he is not going to listen.

This week we saw Michonne head back to the prison and Rick tells Michonne she is one of them now.  From the preview Rick and the gang have decided to leave the prison and not stand and fight.  A good decision on their part.

But we know  Daryl is also out there.  Daryl knows the Governor killed his brother Merle and he has to want revenge.  If I were the Governor I would be frightened.

Rumor has it two characters are leaving in the finale and I am betting one will be Milton.  The Governor is not pleased with Milton because he betrayed him.  Another possibility is Glenn or Maggie.  Glenn asked Hershel for permission to ask Maggie to marry him and rumor has it one of the deaths is going to be heart wrenching.  If Maggie or Glenn died that would be very difficult for the gang at the prison, particularly Hershel.  I would call that heart wrenching.

It is hard to believe anything can be more heart breaking than Daryl seeing Merle turned into a walker.

Glen Marraza has promised us that the season finale will not end in a huge cliffhanger but it will wrap up several story lines.  Andrew Lincoln spoke to E! about the finale and this is what he had to say. ” That episode doesn’t pull any punches. It’s pretty much what everyone has grown accustomed to in our season finale. It’s carnage, and there is death. Something happens that I find incredibly shocking that relates directly to my character and the prison family. It really came out of left field for me and I never expected it. When I read the script, I was really shocked.”

The Walking Dead Season 3, Episode 16 “Welcome to the Tombs” airs on AMC on March 31st, 2013. Check out the preview videos from episode 12 below and let us know in the comments below what you think!