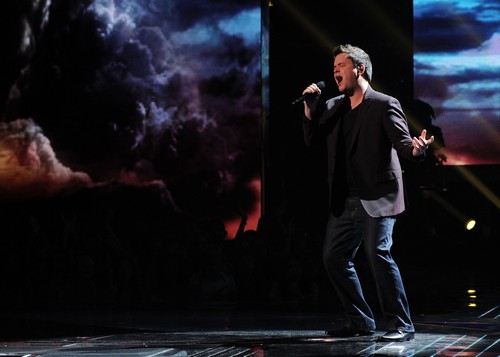 Tim Olstad took the stage  on THE X FACTOR USA for his Top 10 live performance and British Invasion Night.  Tim Olstad sang “Sorry Seems To Be The Hardest Word” by Elton John. On tonight’s show the top 10 performed live in front of coaches Simon Cowell, Kelly Rowland, Demi Lovato and Paulina Rubio for America’s vote and to make it to the coveted “Top 8.”  Did you watch tonight’s performance show? We did and we recapped it here for you.

Judges’ comments: Kelly said, “I must say you definitely have to say you stepped it up this week.  It was sexy, I really enjoyed it.  Good job!”  Demi said, “I don’t think you need the piano to be sexy.  I think you sounded like Robin Thicke.  You found your legs.”  Simon said, “The think about you is that you are like a singing hamster and they want you to be a singing lion.  Because you just stay as hammy the hamster.  Your future is more cabaret rather than a recording artist.”  Paulina said, “You are getting more cuter and sexier, we know you have a powerful voice.  That is all that matters.”

If you want to see Tim make it another week, you have to vote for him.  Tim took to his twitter to thank his fans for his support, “So thankful for all of your support! So fortunate to be given this opportunity. Love hanging with you guys each week!”