Tom Cruise Buying Olga Kurylenko’s Love, Trying To Steal Her Away From Boyfriend 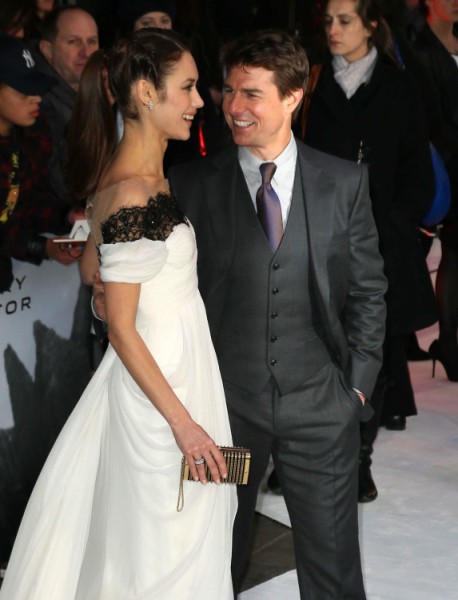 I can’t figure out if this is for publicity or not. The reviews are in and Oblivion needs help but selling a relationship between co-stars Tom Cruise and Olga Kurylenko seems like it would backfire. Instead of the viewers thinking, “Oh, Tom’s wooing her! That’s so sweet,” we’re really thinking, “You better run biotch while you can!”

Or, perhaps, she should cycle away? Because in his latest effort to steal Olga away from her long-time boyfriend, Danny Huston, Tom bought her an exercise bike! Olga Kurylenko astonishingly wasn’t offended by the gift but taken aback by Tom’s generosity.

“Tom’s always thinking of ways that he can make the lives of people around him better, so when Olga was complaining that she wants to exercise but finds going to the gym boring, he took her to a SoulCycle class,” a source told The Sun. “Tom was in New York this week and took her to his SoulCycle class that he goes to whenever he’s in the city – which she loved. Tom had the bike shipped to her apartment in London to use when she gets back from the grueling Oblivion press tour.”

Well, isn’t that nice? It could have just been a friendly gesture. Say what you want about Tom and his crazy marriage to Katie Holmes and his crazy love for Scientology but the dude does come across nice – maybe not genuine – but nice.

So he gets them by playing the attentive guy, right? “I bought you a bike. I remember two years ago you said you needed a new one.”  That works on chicks. They can’t help but love the fact you were thinking about them and remembered something trivial they said. But will it work now?  I doubt it. Olga may be young but she seems much more worldly, no? Julianne Hough makes more sense. But this little “attraction” works for now. It’ll get him through this promotional tour at least.

Is Tom Cruise buying Olga’s affections or buying our asses in the seats for Oblivion? Would anyone want to date Tom after all he’s been through lately? Olga doesn’t seem desperate enough to me.