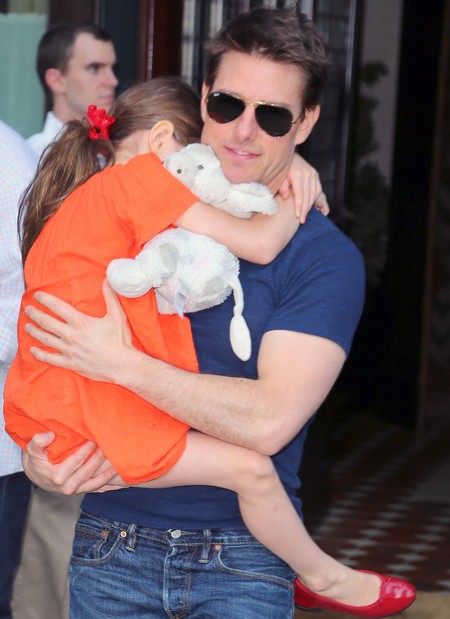 Tom Cruise is losing this lawsuit, and he’s losing it in a public and humiliating manner. He doesn’t seem to realize that with the details of the deposition leaking all over the Internet, his reputation with the public continues to go down the dumps.

The latest bit of idiocy from Tom’s team comes from his publicist accusing Katie Holmes‘ publicist of calling the tabloids. Tom’s publicist reportedly submitted several emails alongside the lawsuit, claiming that Katie’s rep consistently leaks stories to the tabloids, showcasing Katie as the good mother while ‘skewering Tom as a horrible father‘.

Well, Tommy boy is being a teensy bit hypocritical here, isn’t he? For one, he’s as guilty of calling the tabloids as Katie. Whenever he had a public outing with Suri [Cruise] last year, the paparazzi were always there, ready and waiting to take their pictures. There are also several stories in various tabloids [including Star and the Enquirer] that are so sugarcoated that they are obviously plants from Tom’s team. So when Tommy himself arranges for paparazzi photo opportunities and his team leaks their own stories to tabloids, how can he accuse Katie of anything?

Now, I know what you might say. Tom Cruise is one of the most famous men on the planet, the paparazzi are always following him – but that’s not true. There have been instances where Tom has visited Suri, and we haven’t gotten any glimpses of those visits. Tom has plenty of resources at his disposal to enable him to travel undercover – there are private jets, security, etc. If he doesn’t want you photographing him, he’s not going to get photographed. And sure, Katie might have called the paparazzi every day after her divorce, but in all honesty, I’m sure that was more as protection from Scientology goons than for anything else.

So Tom needs to stop putting out all these stories making other people look bad, and concentrate on defending himself in a case that is increasingly turning against him.