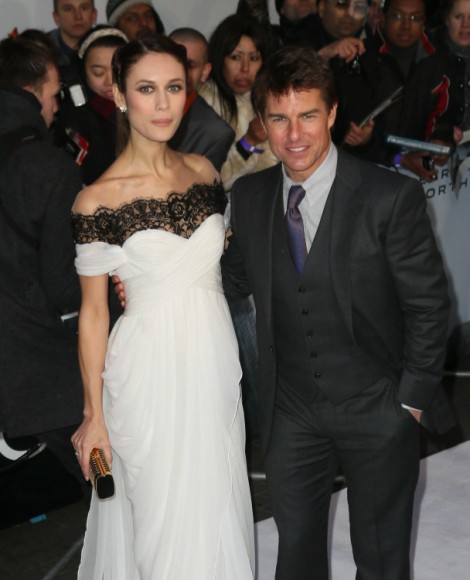 Tom Cruise needs a hit. That’s no surprise. His last two movies, Jack Reacher and Rock of Ages, did not live up to the hype and his leading man status is now questionable at best. Can he front a non-Mission Impossible movie after everything he’s gone through over the past couple years? Yes, we have the Katie Holmes divorce but we also have the Suri Cruise abandonment issues and the fact that people can’t seem to reconcile his Scientologist beliefs. So what’s a guy to do? His new movie Oblivion kinda feels like it’s going to be a colossal dud as well. He has no girl on his arm – no new romance to promote. What can he possibly sell? We have no new pics of his kid so we can’t win us there. But it looks like Tom’s people clutched at straws and found the answer. He’ll namedrop Katie Holmes!

In Germany’s Bunte magazine, Tom Cruise actually opens up about his failed marriage to the actress. “I hadn’t expected it,” he told PRO 7 in Vienna. “Life is a challenge. You are 50 and you think you have everything in order and suddenly it hits you, that’s what life is all about.”

He almost got me feeling sorry for him there! He used the age AND the divorce card. Oh Tommy!

But this sort of reeks of desperation. Tom’s a huge star – arguably the biggest in the world – his people would have told the interviewer Katie Holmes is not an appropriate subject before the interview started. But he obviously didn’t. True, he doesn’t mention her name but he’s talking about her, right? I can’t recall him doing that before. Is it safe to say Oblivion probably sucks and he’s jumped the shark? Is he hoping our pity and empathy will bring us back to him? Is Tom Cruise using Katie Holmes to rebuild his career? Can it possibly work at this point or does he just need to find a new girl and move on?