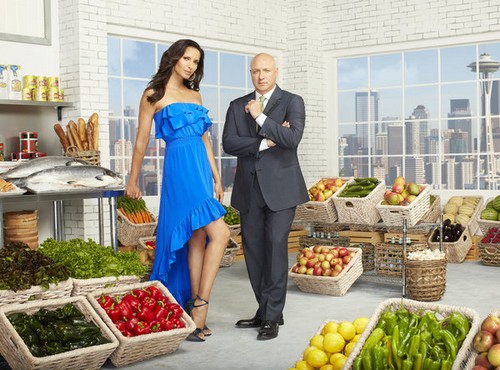 Padma made her first appearance on roller skates, and one chefs pushes everyone to their limits adter a few too many drinks. Emeril Lagasse and Hugh Acheson joined head judge Tom Colicchio and host Padma Lakshmi.  If you missed the episode you can read our full and detailed recap here!

On tonight’s I’m wondering how Top Chef is going to top last week’s Roller Derby girls! Can’t wait to get into tonight’s challenges and see who Josie’s annoying and what yummy dishes they come up with… And can someone explain how Padma stays so thin sampling all those yummies? Here we go!

We’re down to nine chefs. They enter the Top Chef kitchen and see Padma with Bob Kramer, a master bladesmith – one of only 120 in the US. He makes custom knives – very cool – his knives sell for $500 an inch! Too cool. Bob cuts a sisal rope with his knife and then a double layer.

First round is knife sharpening. Josie’s with John and Kristen and they’re talking big. The knives have to cut paper. John calls for a check and Kristen’s knife isn’t ready – but her knife cuts and John doesn’t! John finally gets it. The blue team comes in next and the green team (Stefan, Lizzie & Brooke) is out.

Round 2 is 500 potatoes carved into little footballs – called turning. They have to use chef’s knives which make it more challenging. The chefs are having a tough time using the larger knife. Josie nicks herself and she’s out and her team is one down.

The blue team wins round two – by just two potatoes. Josh, Micah and Sheldon face off against one another in the final round. They have to break down rabbits – called frenching. Micah wins the quickfire rapidly and has immunity. Bob Kramer hands him a $4,000 knife and he’s thrilled. Sheldon congratulates him earnestly for besting him. Nice sportsmanship!

Elimination Challenge: For tonight’s Elimination Challenge, they’re going to revisit the past. They are told they have to prepare healthier versions of the dishes they’re assigned. The prize is $15,000 provided by sponsor Healthy Choice. The chefs get Kindle Fires loaded with memorable moments from past seasons that will direct their assignments.

The chefs start browsing through their kindles and we are treated to explosive and fascinating moments from past seasons. The chefs head out to do their shopping at Central Market in Seattle.

Josie has season one roast chicken and they feature the quote “I’m not your bitch, bitch!” Lizzie has season five scallop dish. The chefs are speeding through the market grabbing ingredients and wine.

Back at the To Chef pad, they’re nuking Healthy Choice entrees for dinner. They’re watching the “pea puree” clip. Stefan has season 2. The chefs ponder what the memorable moment from Season 10 will be.

Next day in the kitchen, the chefs are gearing up for their two and a half hour prep before serving fans. John’s making season three sea urchin and mushroom risotto. John’s upset that he can’t find a proper flat bottom pot.

Kristen’s got chicken pot pie and she’s struggling to make it healthy. Josh has season six – a pork dish. Josie says the challenge is important to her because she’s always trying to get her family – with health concerns – to eat better.

Brooke reveals she was once heavier and so she’s very health conscious about her cooking now and she’s excited about the cash prize. She’s working on her pea puree. Micah has season nine duck breast with polenta. He says he wants to make his dish sing.

Lizzie’s frantic because her scallops don’t smell fresh. Stefan’s already freaking as well. The pressure is on and the kitchen and the competition are both heating up! Who will make the most of their déjà vu dish? Will it be stinky scallops or the pea puree? Maybe not – Josh’s pork dish sounds yummy – bacon’s always a fave – but how healthy can you make a bacon-centric entrée?

At the Palace Ballroom, fans of Top Chef flood in for their gourmet meals revisiting past season memorable moments. Padma’s there with Wolfgang Puck, Tom Colicchio, Wylie Dufresne (WD50) and Jonathon Waxman (Barbuto). The latter two are former contestants themselves, so they understand the pressure but I’m sure won’t go easy on the contestants.

Jonathon says Josie’s dish is not exciting. Wylie says Stefan’s grilled cheese is too fatty. Padma doesn’t like the risotto John made and Tom agrees. The next group has five minutes left and they’re stressing out. Lizzie can’t get a good sear on her scallops and knows it’s bad!

Season four through six are served. Sheldon introduces beef carpaccio and mushroom salad, Lizzie her scallops with fennel, Josh did grilled pork tenderloin with peaches. The pork goes over well, but the beef is criticized for its shredded appearance and the tofu is deemed flavorless. The scallops are termed timid and one of the judges sniffs them suspiciously.

There’s one minute left for the final group. Season seven through nine are served! Brooke shows her salmon with black rice and pea puree. Kristen did poached chicken breast rather than traditional chicken pot pie. Micah did duck breast with miso polenta. Micah’s duck gets mixed reviews. The fans like it though. Kristen’s get raves from Tom for a light, flavorful dish. Brooke’s plating was nice and her salmon and puree get compliments from Tom.

Seems like Lizzie’s scallops may be in trouble as well as Stefan’s grilled cheese, John’s risotto and Josie’s chicken. Wonder who will be in the bottom? Josh, Kristen and Brooke are my predictions for the top spots. All I know is I’m hungry and wish I was sitting in the Palace Ballroom sampling nine seasons of Top Chef cuisine!

Padma calls in Josh, John, Kristen, Lizzie and Brooke – those must be the top dishes! Josie, Sheldon and Micah are left to worry… Padma tells them they served the best AND worst dishes. Nice twist! Josh, Brooke and Kristen served the favorites. Wolfgang complimented Brooke’s dish. Tom said Kristen’s was homey with a more modern presentation. Tom said Josh’s pork was good and they all wanted more. One of them is up for $15,000. Chris says the winner is… Kristen! Wow – that’s her second cash win. She got $10,000 just a couple of episodes back. She gets the cash and Healthy Choice will use her recipe to inspire one of their meals that will be in stores.

Lizzie and John are the worst. Chris calls out John’s rice and he (as always) plays the blame game and says he couldn’t find a good pot. He said the pot he had shouldn’t have even been in the restaurant. Josh comes out of left field and said the pots were fine. John doesn’t like that.

Padma asked Lizzie if she tasted them and she said she couldn’t get an even sear. Wolfgang said they weren’t good. She apologizes and says she knows it was awful. Padma holds up another Kindle fire. It has the memorable moment from the current season. Lizzie and John get to have a face to face challenge cook off for the final elimination. They’re going to make CJ’s burger! They’ve got 45 minutes to make a healthier version of the burger.

They tell the other three that they’re safe and they are extremely relieved. They discuss that John’s always making excuses. He says Lizzie’s food was foul and raw and he shouldn’t have to be cooking against her.

John’s making a lamb burger. He insults CJ’s original dish – naturally. Lizzie’s making a chicken breast in lieu of a beef burger. This should be good since they are two very different dishes. John took Lizzie’s dill and she’s not happy. She’s furious that he took all of her ingredient without asking.

John keeps leaving the oven open and Lizzie has to ask him again and again to close the door. John said he could have taken the whole jar of pickles and shafted her completely. Jeez. What’s with him?

The timer goes off and the chefs bring out their burgers. John says he made a Moroccan lamb burger with a fried egg and pickle salad. Wolfgang mocks and asks if he could find the right pan. Wolfgang says the lamb is too dry. Chris likes the salad.

Lizzie introduces her chicken burger with ricotta and goat cheese. Wolfgang says her chicken is moist and flavorful. Chris said it needed a little bit of salt. Tom says he likes both dishes.

Decisions, decisions. I would like to see John go – he’s a real piece of work – but he does bring more drama to the kitchen than reliable Lizzie. I’ve got fingers crossed that Lizzie’s chicken burger prevails. We’ll know in a moment!

After the break, Chris says Lizzie’s his choice. Wolfgang chooses Lizzie as well – he says hers is more interesting. Tom says Lizzie deserves to stay and Padma agrees and tells John to pack his knives and go. John says he’s not bitter but then proceeds to complain bitterly about being eliminated. He says “I could have been a real big a**hole.” Hello, when was he not exactly that? Oh well. They can enjoy him in the Last Chance Kitchen!

Disclosure: I’m required to disclose a relationship between our site and Bravo. This could include the Bravo providing us w/content, product, access or other forms of payment.