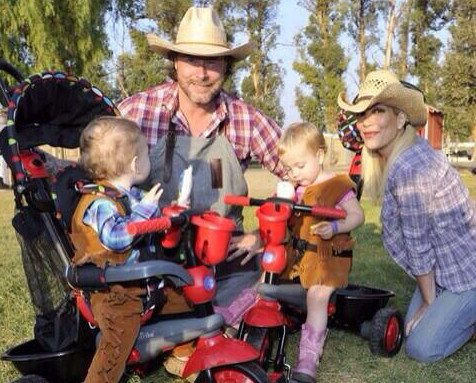 With rumors of Dean McDermott‘s cheating more potent than ever, Tori Spelling has chosen not to comment on any of the allegations; instead, she’s tried the passive aggressive approach to protect her family’s image by posting happy-happy holiday pics and video on edTORIal. While she’s making good efforts to hide her and Dean’s troubles, Tori was recently photographed without her wedding ring, which sends a rather troubling message: Is their marriage on the chopping block?

Spelling’s bling was absent when she was spotted leaving Benihana in Encino, California, on Sunday afternoon. Her children, Liam, Stella, Hattie, and Finn were all by her side, as was her best friend Mehran Farhat, but Dean was nowhere to be seen. Sometimes actions speak louder than words and, if Dean and the wedding ring’s absence are a clear indication of her relationship’s current state, then perhaps things are bleaker than those family holiday pics suggest.

Radar reports: “When Tori came out of the restaurant [around 9 p.m.] she seemed stressed out and was not happy to see photographers. She had her nanny with her to help with all the kids and she stayed tight-lipped when asked questions about Dean’s infidelity. Tori did not make eye contact with anyone and just stared ahead.”

Dean allegedly cheated on Tori with Emily Goodhand; however, Tori has always been worried that Dean might cheat, primarily because they were both married to other people when they met. What do you think about Dean and Tori’s *probably* crumbling marriage? Will Tori overlook Dean’s scumbagginess? Or is that absent wedding ring a sign of impending divorce?