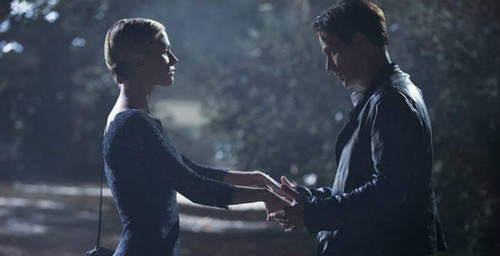 The penultimate episode of TRUE BLOOD aired tonight and it was jammed packed with action and lots gore.  If you are a big True Blood fan, this season has not disappointed and sadly next week is the final episode of the sixth season.  If you are like me and you are anxiously awaiting each episode, we have managed to get our hands on a sneak peek video and some spoilers to wet your appetite for next week’s episode 10 finale called “Radioactive.”  So sink your fangs in and enjoy!

On tonight’s episode Bill tried to ferry Warlow away from the faerie plain, but Sookie was having none of it.  Bill threatened her and she gave him a does of faerie light.  Meanwhile, Eric arrived at vamp camp, looking to inflict serious human damage and he did.  Bill arrived shortly after and found the carnage that Eric created.  Eric let all the male and female vampires out of Gen Pop and told them to go kill humans.  Meanwhile, Eric heals Jason and the team up to go through the vamp camp.  Eric found Pam’s doctor and told him he forgot to ask him, how he was going to die.  The doctor tells him he does not care, he is dying a happy man because he had sex with Pam.  In Bon Temps, friends and family take emotional turns remembering Terry, definitely went through a couple of Kleenexes.  In the eulogy we got a few flashbacks to some scenes with Terry.  Bill felt the pull of Lilith’s  sirens.  So much more happened tonight and if you missed tonight’s episode you can read our full and detailed recap, right here.

Spoiler alert: If you’re one of those people who doesn’t like spoilers, stop reading now! We have some juicy spoilers for you about the season 6 episode 9 of HBO’s “True Blood.”

On tonight’s finale Jason is feeling an attraction to a vampire and we know Violet sticks around for another season so it has to be her.  Jessica has moved on to James who will also be around next season too.

Sookie is going to have to make a decision about Warlow, he survived Eric almost sucking all his blood out of him – so now she has to decided whether she will keep her word and be his faerie vampire.

We are going to meet a bunch of new characters next week that are staying around for a while.  We are also going to be introduced to a new crisis that is going to be a problem for not only the vampires but for humans as well.

Don’t forget on episode 9 a bunch of vampires hijacked a truck of Tru blood and now they are sick and roaming and they are on the march.  The reverend warns the citizens of Bon Temps about them.  Jessica is pissed at Bill and lets him know that he has the opportunity to make thinks right.

It looks like Andy and Jason are going to go and try to fix the situation as Jason says, they are going in hard, there is no other way.

Even if Sookie is still mulling over being with Warlow it looks like Warlow is making plans for them to be together.

True Blood episode 10, “Radioactive” airs on HBO on August 18th, 2013.   Check out the preview video below of episode 10 below and let us know in the comments below what you think!  Are you enjoying season 6 of True Blood?