BY Kristine Francis on July 15, 2013 | Comments: 2 comments
Related : Recap, Television, Under The Dome 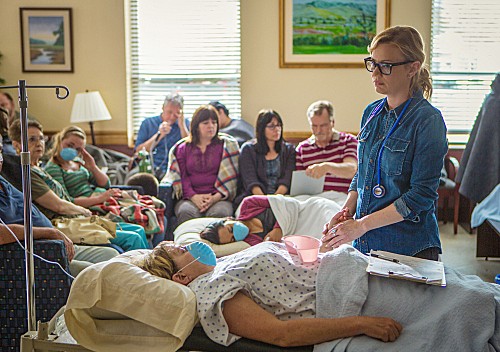 Tonight on CBS their new drama UNDER THE DOME continues with its third episode called, “Outbreak.” On this week’s episode Julia continues to search for answers into her husband’s disappearance. Did you watch last week’s episode?  If you want to get caught up and missed it, we watched and we recapped it here for you.

On last week’s show when a former deputy went rogue, Big Jim recruited Barbie to join the manhunt to keep the town safe. Meanwhile, Junior was determined to escape the dome by going underground.

On tonight’s show the people of Chester’s Mill fall into a state of panic as an outbreak of meningitis strikes their community, threatening their already depleted medical supplies.   Meanwhile Alice is helping to take are of patients in the clinic. They will obviously have to get that under control or there will be no one left on the show. Meanwhile, Julia continues to search for answers into her husband’s disappearance.

This is definitely one series that you will not want to miss this summer. Don’t forget to stay tuned to Celeb Dirty Laundry where we will be live blogging every episode all summer long.  Under the Dome Episode 4 “Outbreak” airs tonight at 10PM on CBS.

Pandemonium is breaking out. The military appear to have given up and are packing and heading home. Leaving the civilians of the town desperate and scared. Linda tries to quiet them but is unable to with the Pastor stirring up even more trouble. Big Jim is able to get everyone to return home but the problem isn’t over yet. Linda collapsed.

Julia is tracking Barbie last whereabouts, with the help of Barbie’s map, when the direction leads her to find out that her husband sold his car to DJ Phil. She could have questioned him further but he collapsed right in front of her.
In the bunk, Angie isn’t getting anywhere with the pair of scissors she stole from Junior. She decides to try and put in better use by attacking Junior. Her plan fails and she’s only injured his hands.

Norrie’s parents take her and Joe to the hospital. They want test to be run but the hospital has run out of doctors. Luckily, Norrie’s mom, Alice, had her training done in medicine. She’s going to be needed even more than she thought. There appears to be an outbreak that’s happening. Julia wants to confront Barbie about the real reason he came to Chester Mill but she also get sick.

The hospital has to go under quarantine, Big Jim and Barbie need to go in search for more medicine so Big Jim puts Junior in charge of the hospital and gives him a gun to make sure no one leaves. Junior is now so focused on what’s going on at that hospital, he won’t be able to help Angie after a pipe bursts in the underground shelter. The whole place is filling up with water and she’s unconscious.

Eventually she comes to but she still has the same problem as before. Trapped underground with no one to help her or hear her screams.

The hospital epidemic is becoming fatal. People have begun to die and the only doctor is starting to feel unwell herself. Big Jim and Barbie get to the pharmacy only to find it’s been ransacked. The pastor stole the drugs and is burning them. He feels those that die have been chosen to do so by God’s plan. Barbie and Big Jim get to him in time to stop him.

Julia finds out about her husband’s cabin. She tries to leave the hospital but can’t get past Junior. Junior can’t let her go although he reveals he found Barbie at a deserted cabin one time. More concerned than ever, Julia is planning to break out of quarantine.

People want to leave the hospital and after a moment of being too trigger happy, Junior calmy talks to everyone and tells them to do what is for the best. He then leaves the room and the gun behind.

Julia does escape and goes to the cabin. She finds certain bill her husband hid from her. She would have continued to look but she passed herself this time. But there isn’t anyone near to help her.

Norrie is still curious about their seizures. So she asks Joe to test her theory out with her. He agrees and they touch. At first nothing happens but then they do have seizures. This time they make sure to record it. Later they’re watching the video and can’t understand why they’re saying the same thing. In the middle of the video Joe is still seizing when he turns to the camera and makes “Shush”. Norrie wants to understand what that was. Jo tells her he thinks the dome wants them to keep this a secret.

Barbie and Big Jim return to the hospital. Barbie questions Phil over Julia. These two know each other. Barbie wants to know how much Phil told Julia but the guy was so out of it he can’t remember. Barbie goes searching for Julia only to find out she did get something from Phil. She learned about the cabin.

Big Jim finds out what happened at the hospital with Junior. He’s so proud of his son that he suggest to Junior to try out for law enforcement.

The vaccine has been administered and people can start going home. Alice and Carolyn can’t wait to return to their room above the diner. Joe offers up his place. His parents and sister are gone so does have the room. The family accepts his offer.
Junior and Linda are at the police station where get to talking. He wants to help her feel better. In returned she offers him a badge.

Big Jim finally returns home. He had a run in with the Pastor but the real danger is when he hears a woman screaming. He follows the sound to his bunker and finds Angie.