BY Kristine Francis on July 22, 2013 | Comments: 2 comments
Related : Recap, Television, Under The Dome 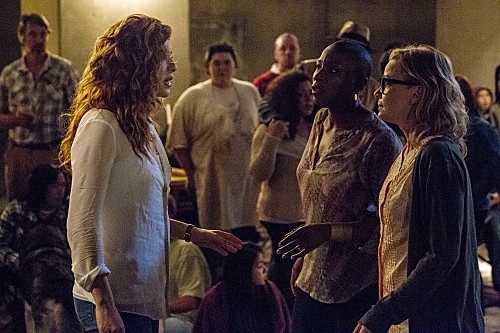 Tonight on CBS their new drama UNDER THE DOME continues with its forth episode called, “Blue on Blue.” On this week’s episode the community braces for a threat from outside the Dome. Did you watch last week’s episode? If you want to get caught up and missed it, we watched and we recapped it here for you.

On last week’s show the people of Chester’s Mill fell into a state of panic as an outbreak of meningitis struck their community, threatening their already depleted medical supplies.   Meanwhile Alice was helping to take are of patients in the clinic. The obviously had to get that under control or there would be no one left on the show. Meanwhile, Julia continued to search for answers into her husband’s disappearance.

On tonight’s show the Chester’s Mill residents receive an unexpected visit from their loved ones on the other side. Meanwhile, the community braces for a threat from outside the Dome.

This is definitely one series that you will not want to miss this summer. Don’t forget to stay tuned to Celeb Dirty Laundry where we will be live blogging every episode all summer long.  Under the Dome Episode 5 “Blue On Blue” airs tonight at 10PM on CBS.

Jo and Norrie are speculating about what happened to them when they see a bunch of cocoons. Jo thinks it’s a sign and Norrie is starting to believe him.

Big Jim hasn’t revealed his son’s dirty deeds yet. He’s keeping Angie locked up and his day his getting worse as he tries to ignore the severely damaged pastor. Although Pastor may not be as crazy as Big Jim thought. His hearing aid is apparently picking up noises the dome is making. It seems the dome is making out almost pronounceable words.

Jo and Norrie are still at the edge of the dome when Barbie joins them. He doesn’t have time to truly look at the cocoons though because he sees the military is letting civilians near the dome. Norrie, optimistically, thinks its Visitor’s Day.

Norrie and Jo go to spot designated for visitation. Linda wanted to be conscious so she had Barbie tape off the dome so nothing else blows. However seconds later she sees her fiancée and breaks her own rule to kiss him through the dome. Everyone is enjoying their reunion when Norrie sees a mysterious holding a sign with her name on it. She goes up to him and he shows her baby pictures of herself. He claims to be her dad.

The Pastor and Big Jim have also traveled to the visitation point and its finally revealed how they were making money for the town. All the secrets were about supplying materials to drug dealers. That explains why the Pastor earlier and tried to burn all the pharmaceuticals. The Pastor is threatening Jim with this tidbit and gives him a deadline to reveal it himself.

Julia is still at the radio station with Phil when she hears over the feed the news people. The chances of seeing her husband on the other side have gone down. But she still goes. She sees her sister-in-law. The lady had a letter for Julia from her husband basically saying sorry and that’s it.

Alice and Carolyn go and find Norrie. Norrie is upset. Too upset to listen to her moms explain because it looks like her dad showed up only for the cameras. She flees the scene and Jo follows her. She gets her father isn’t really there for her but she’s hurt. Not even Ben’s news that China threaten to bomb the dome could faze her.

Barbie finds Dodee and he gets her to lip read while he’s talking to an army soldier. With her help he finds out that the army is going to bomb them. The army only made the decision after the butterflies appeared. The two warn Lynda, Big Jim, and Julia. Julia heard over the broadcast earlier 13.15 which means they’re bombing the place that afternoon. Julia gets to the radio station and warns everyone what’s about to happen and to take shelter.

Big Jim decided to release Angie. If they’re all going to die then she should die a free woman. Junior tries to go to the shelter for Angie when Big Jim confronts him. Jim tells his son he let Angie go and Junior rushes off to find her. He ends up cornering her at her house.

People are taking shelter in a cement underground. It’s there that Barbie reveals why he doesn’t mention his tour of duty. He was given a special coin when he and others in fact actually killed some of their own men. It was covered up but Barbie has had trouble living with it. A lot of people at this point have figured out that there is little possibility of them surviving weapons of mass destruction.

Junior explains what’s happening to Angie and he tells her he’s sorry. In a messed up way she forgives him.  Dodee and Phil are dancing in the bunker.  Carolyn and Alice are worried about their daughter that is still above ground.  Julia and Barbie are looking for the kids.
& Linda is up top saying goodbye in her own way when the bomb goes off.

Surprisingly the two still stands and so did the dome. Everything around it; no so much.  The Pastor believed they survived because he repented and now its Big Jim’s turn. Big Jim takes another option. He pushes the Pastor and his hearing aid against the dome and watches the dome kill his once co-conspirator.