BY Annemarie LeBlanc on July 29, 2013 | Comments: one comment
Related : Recap, Television, Under The Dome 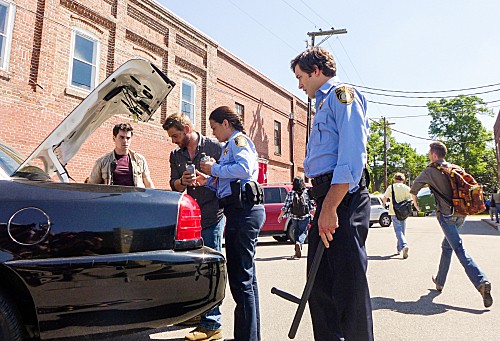 Tonight on CBS their new drama UNDER THE DOME continues with its forth episode called, “The Endless Thirst.” On this week’s episode Julia discovers a strange connection that two of the town’s residents have with the Dome. Did you watch last week’s episode? If you want to get caught up and missed it, we watched and we recapped it here for you.

On last week’s show the Chester’s Mill residents received an unexpected visit from their loved ones on the other side. Meanwhile, the community braces for a threat from outside the Dome.  The threat was a bomb which the people inside the dome were afraid would kill them.

On tonight’s show when the town begins to run low on water, the residents of Chester’s Mill begin to fight for the remaining resources. Meanwhile, Julia discovers a strange connection that two of the town’s residents have with the Dome. Barbie and Julia will get closer but we can’t blame her, he is cute in that rugged kind of way. Unfortunately, once Julia finds out Barbie’s dirty little secret, it is going to be hasta la vista baby for him. Angie needs rescuing and Barbie is there to rescue yet again another female.

This is definitely one series that you will not want to miss this summer. Don’t forget to stay tuned to Celeb Dirty Laundry where we will be live blogging every episode all summer long.  Under the Dome Episode 6 “The Endless Thirst” airs tonight at 10PM on CBS.