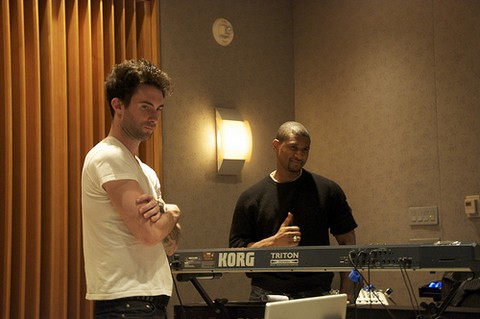 Egotistical personalities usually clash in the entertainment industry. We’ve heard horror stories of actors breaking faces and punching throats behind the scenes of a blockbuster production, divas ripping apart their dressing rooms because their mirror was too small, and reality shows bursting at the seams with hysterical personalities. This phenomenon is not uncommon in the sparkly streets of Hollywood, nor is it uncommon on the set of The Voice.

According to Star magazine, a feud is boiling between Adam Levine and Usher, because the latter’s ego is just too much to bear. A source explains, “[Usher has] created an enemy [in Levine with his] self-absorbed, arrogant behavior. Usher came onto the show with a massive attitude. He acts like he is the top dog and deserves to be catered to from the minute he arrives – which is usually hours late.”

This feud was ignited when Usher was replaced by Levine at a concert for a Chinese billionaire’s spoiled son. Allegedly, Usher’s demands “got out of hand”, so he lost the gig and flipped like a manic dolphin. The source adds, “Usher said that he’s a far bigger deal than Adam is and that he’s better watch is tone. But Adam straight up told Usher that he needs to back off and dial down the attitude, then just walked away in disbelief.”

On-screen, The Voice is coated in sentimental wish-wash, but when the cameras stop rolling, the sweet judges turn into Joan Rivers’ love children. Usher and Levine’s apparent feud could just be wishful thinking, but as we know Hollywood, there’s always the off-chance that a big personality will go all Sally-Field-in-a-Lifetime-movie.

If it’s true, Usher should be slapped silly. If not, The Voice should really look into offshore insanity investments. They say it works well for ratings and lasting appeal.