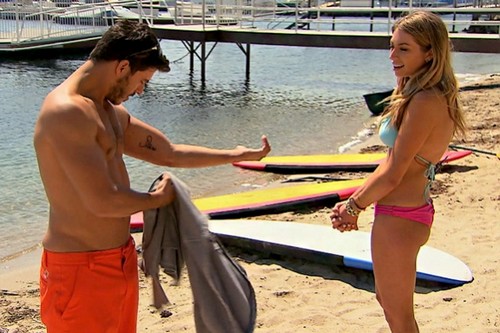 Tonight on Bravo VANDERPUMP RULES continues with a new episode called, “Only the Lonely.”  On tonight’s episode Jax and Stassi rekindle their romance, while Tom and Kristen’s relationship drama threatens his big break.  Did you watch last week’s show?  We did and we recapped it right here for you.

On last week’s show x gets a tattoo of Stassi’s name to prove his love, but before the ink is even dry, a romantic dinner turned into a shouting match when Stassi revealed there’s another guy in her life. Later, Stassi attacked Scheana for turning Lisa against her, and Tom attempted to put together the pieces of his broken relationship with Kristen but finds the instructions hard to follow.

On tonight’s show Stassi rekindles her romance with Jax when the SUR staff heads to her mom’s house in Lake Arrowhead. Tom prepares for the biggest performance of his career, but a late-night battle with Kristen threatens to derail the weekend. When Scheana complains of yet another injury, Lisa smacks her down for playing the sympathy card.

Tonight’s episode is going to be another drama packed one, which you won’t want to miss. So be sure to tune in for our live coverage of Bravos’ Vanderpump Rules Season 2 episode 3— tonight at 10PM EST! While you wait for our recap, hit the comments and let us know how excited you are about the new episode of VR tonight and check out the sneak peek video below of tonight’s episode!

On tonight’s episode of Vanderpump Rules, Jax finally showed Stassi his new tattoo (of her name)! Stassi and her friends took a trip to her Mom’s house in Lake Arrowhead. Stassi’s Mom is not a fan of Jax, to say the least. She puts him in the hot seat and asks him what he is doing with her daughter. He claims he still loves her, but Stassi’s Mom doesn’t want to hear it. They decide to tolerate eachother for the evening.

Back at Sur, the manager is filling Lisa in on the latest Scheana drama. The other employees are tired of hearing about Scheana’s injury, and they think that Lisa is babying her. Lisa doesn’t really want to hear about their drama, she says she can’t get involved.

In Arrowhead Stassi, Jax, her Mom, Kristen, Katie and Tom go out for drinks. As soon as Kristen gets a few drinks in her, she begins going in on Tom. Jax takes him aside, he is embarrassed for him, he is tired of him sitting idly and letting Kristen belittle him. Stassi puts in her two cents and tells Kristen she should just break up with him. Kristen doesn’t want to hear it, she thinks none of her friends know what it is like to be in one relationship for five years.

The gang returns to Stassi’s Mom’s house. Tom is trying to practice for his gig the next day, but Kristen is drunk and wants to argue. She tells him that he shouldn’t practice his guitar in the house, and then it somehow escalates to her not kissing him goodnight. She runs into Stassi and Katie’s room and gets them riled up, Katie ends up cursing out Tom.

The next day Stassi Mom questions her about her and Jax. She wants her to make a decision, she needs to either move one or give him another chance.

Jax is trying to win back Nikolai. Stassi’s little brother. Nikolai is eight, and eight times smarter than Jax. He lectures him on how to not cheat on girls, how to be a good boyfriend, and how to handle Stassi. He tells Jax to take Stassi outside and tell her how he feels.

Lisa heads to Sur, and finds Kristina there, instead of Scheana. Kristina is annoyed because she had to cover for her, she has a new injury, apparently she can’t see out of her eye now. Kristina throws Scheana under the bus, she is tired of her drama.

Peter (Sur manager) and Schwartz join Stassi and the gang in Arrowhead to go to Tom’s gig. They all go out to lunch, and Kristen puts Tom on the spot, she wants him to apologize to everyone. He does apologize, and he gets teary eyed. The two have a heart to heart in front of everyone, and it is super awkward.

Back at Sur Lisa is making her rounds. She takes Scheana aside and reprimands her about her string of injuries, first her tooth, then her foot, now her eye. She wants her to stop playing the victim, and stop giving the girls more ammunition to hate her.

Tom is setting up for his gig in Arrowhead, an outdoor concert. Tom’s band takes the stage, and his friends cheer him on. Kristen is touched by his performance, and it reminds her of why she is in love with him. Stassi is not excited about their reconciliation.

Back at Dayna (Stassi’s Mom)’s house Stassi and Jax are taking a trip down memory lane. Stassi reveals that she brought him to Arrowhead to try to fix things between them, but his presence upset Dayna so much, she thinks they need more time. Jax says he needs some sort of verification that eventually they will get back together. Stassi gives him a tiny kiss to show that she is seriously considering getting back together with him.