Vin Diesel on the Cover of Prestige Hong Kong: How “Fast and Furious 6” Will Make History 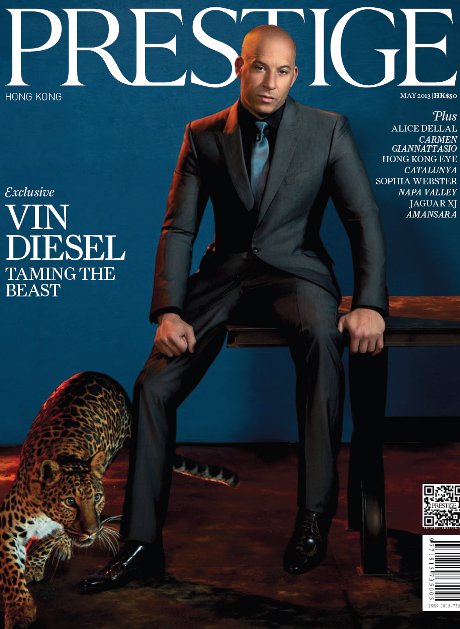 Vin Diesel has poured a lot of heart and soul into the upcoming Fast and Furious 6 movie, and he took some time with Prestige Hong Kong to talk all about the process of filming and how this installment just might be the most memorable yet — for the franchise as a whole and for all of Hollywood. The actor conducted a fairly awesome photo shoot for the magazine, and the photos, including the full article, can be viewed here.

When the actor discussed why he thinks this Furious movie is going to be the one to be remembered by fans and critics, he says, “I think Fast 6 is going to make history for a few reasons. Never has a character been resurrected by the audience. The Letty character [Michelle Rodriguez] has been resurrected by the audience. We’ve never seen that in this town.”

We’re definitely looking forward to welcoming back the Letty character, as Michelle Rodriguez brings a wonderful dynamic to the films and always delivers charming performances.

It turns out that Diesel is also a writer, and he says that, while his main focus seems to be on acting, his knowledge of writing for the screen continues to help shape him as a performer. “I’m a writer,” he says. “But I guess don’t exercise my writing ability in the traditional way. It’s miraculous how much a writing interest or experience in the writing world helps you as an actor with this sea of unfinished scripts that we’re supposed to turn into movies.”

He also admits that he stepped into the role of director because he just wasn’t getting the Hollywood roles like he wanted: “I started directing as a shortcut to get in front of the camera, as I clearly was not getting the [movie] roles”

And then a bit on fatherhood, which seems to be one of his top priorities at the moment:

“I don’t think there’s a parent on the planet that doesn’t wake up and think, “How can I be a better parent?”

Are you looking forward to Fast and the Furious 6, which is set to hit theaters May 24th?