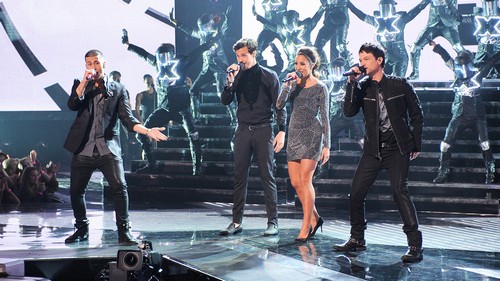 Tonight after a fantastic season it is the season 3 Finale of THE X FACTOR USA and host Mario Lopez will reveal who America has chosen to be the season 3 winner of The X Factor by the end of the evening.  Did you see last night’s final performance show?  We did and we recapped it right here, for you.

Last night Alex & Sierra, Carlito Olivero, and Jeff Gutt gave it their all as they took their final shots at becoming the next X FACTOR winner. Who will be crowned? It’s anyone’s game!  Everyone brought their best performances of the season.  If you missed any of last night’s performances you can see all the videos right here.

On tonight’s show the finale results show is bound to be an star-studded extravaganza of amazing performances! Incredible musicians will be gracing the stage to perform including, Pitbull and Kesha who will perform their hit, “Timber.” Legendary songstress, Mary J. Blige, will hit the stage, as will Leona Lewis, One Direction, and Glee star, Lea Michelle.  At the end of the evening they will reveal who won.  We conducted a poll today on who you think will win the X Factor.  There is still time to vote, GO HERE.

Who do you think will be crowned the ultimate winner tonight?  Who are your rooting for? Don’t forget to come back to this spot at 8PM to find out which artist was named the winner of The X Factor USA season 3.

Tonight’s season finale of X Factor starts off with a quick recap of last night’s performances. The first performance of the night is a group song by all of the X Factor contestants, Alex and Sierra, Jeff, and Carlito join forces with the contestants that have already been eliminated to sing one last song together.

Carlito Olivero is taking the stage next. He is performing the Christmas song “Please Come Home.” [VIDEO HERE] After his performance he wants to especially thank Paulina for all of the mentoring she has done for him. Mario shares a touching video that they put together of his friends and family back home in Chicago wishing him luck tonight, and expressing how proud they are of him.

Up next is a guest performance by singer Mary J. Blije. She will be singing the Christmas carol “Rudolph The Red Nosed Reindeer.”

Contestant Jeff Gutt is performing his Christmas song next. [VIDEO HERE] Afterwards he thanks Kelly for all of the help he has received from her. Kelly says that she “loves him” and thinks he is an “exquisite man.” Mario shares a video of all of Jeff’s friends and family from Marine City wishing him luck tonight.

Alex and Sierra are singing “All I Want For Christmas Is You” next. [VIDEO HERE] Simon has loved working with them because “they have taught him a lot through the process,” and he loves that they haven’t changed since day one. Mario shares a video of Alex and Sierra’s friend and families back home, and wishing them luck tonight.

Glee’s Lea Michele is taking the X Factor stage next.  She will be performing her single “Cannonball.”

It’s time for Mario to reveal the finalist with the lowest votes.  Based on America’s voted, the act finishing in third place and leaving the competition is… Carlito Olivera.

X Factor vet Leona Lewis will be taking the stage next to perform live, she will be singing a song from her first ever Christmas album “Christmas With Love.”

Pitbull is performing next, he will be singing his popular song “Timber.”

Alex and Sierra and Jeff Gutt are singing John Newman’s “Love Me Again” next, and performing together on the X Factor stage for the last time.

Up next on is the popular band One Direction singing their hit song “Midnight Memories.”