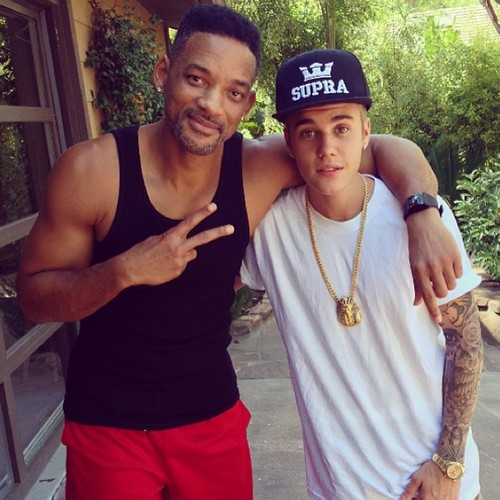 Justin Bieber recently revealed that he often speaks to Will Smith several times a week for advice. Uh, are we seeing a Scientology recruitment session going on here?

We already know that Justin and Jaden Smith are good friends, and Justin claims that Will is his ‘most present mentor’, and the two discuss ‘potential issues, emotional or otherwise’. You know what this sounds eerily similar to? Auditing sessions that Scientology is so famous for.

Will is pretty much outed as a Scientologist now, along with wife Jada Pinkett Smith, and it’s not hard to see why Scientology would target Justin Bieber. They’ve always tried their best to acquire major celebrities to their cause, and almost succeeded in turning Penelope Cruz and Brad Pitt at one point. They usually get their own members to slowly and steadily plant ideas into their target’s head, and Brad even reportedly went through an auditing session. Thankfully, he realized before it was too late what he would be getting himself into, but Justin is a LOT younger and more impressionable than Brad. He’s easily influenced, as we can see from his recent behavior.

It would also be a huge coup for Scientology to gain Justin Bieber as a member. Not only would they get a chance to clean him up and take the credit for his reformation, but they would also get hundreds of new recruits in the form of Beliebers. I have no doubt that Scientology leader David Miscavige has already planned out his long-term strategy concerning Justin, and is using Will as a way to get closer to the boy. Sounds creepy? Well, that’s because it is. Their tactics in gaining members and keeping members borders on sociopathic, and it’s more of a cult than a religion.

What do you guys think about Justin joining Scientology? Let us know your thoughts in the comments.