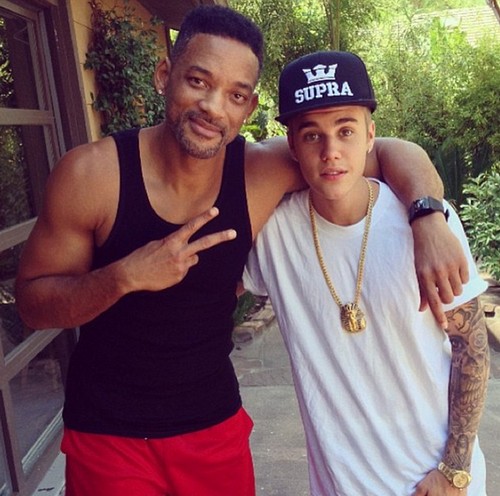 Is Will Smith recruiting Justin Bieber to Scientology? Will and Justin have been spending some time together, largely due to the fact that Justin is good friends with Will’s son, Jaden Smith. Justin uploaded a picture with himself and ‘Uncle Will’ on Instagram, and the two look like they’re in the midst of some bonding time.

There are rumors floating around that Will is trying to show Justin the benefits of Scientology, and if his idol and his best friend are both part of it, what’s to stop Justin from joining? Imagine the coup for The Church of Scientology if Justin joined? Think of the millions of impressionable Beliebers who would follow blindly into the clutches of the cult and they money they would pay to be members with their idol.  Yes, “Justin Bieber Joins Scientology” is the headline David Miscavige is dying to read.

Considering that Justin is at his most impressionable right now, I wouldn’t be very surprised if these rumors turned out to be true. Yes, it sounds ridiculous, but how many people would have thought that Will Smith and Tom Cruise would turn out to be part of a religion that worshiped aliens?

Honestly, it might even do Justin some good to get a sense of community for a while. We all know celebrities in Scientology are treated way better than the plebeians, and it might make him behave. Obviously, it’s probably not the smartest choice in the long-term, as we’re seeing with Leah Remini and other Scientology defectors.

Anyway, this is all speculation and based on some unfounded rumors online, but I thought it would be interesting to explore the ramifications of Justin joining Scientology. Would that lead to his fans joining? It certainly would be great publicity for the religion, especially after the PR nightmares it’s been facing in the wake of so many high profile defectors and negative news stories.

What do you guys think about the possibility of Justin joining Scientology? Do you believe Will is trying to recruit him? Or is it just a load of hogwash? Let us know your thoughts in the comments.