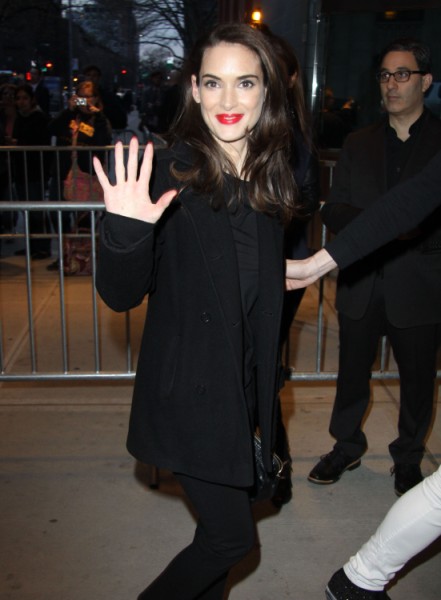 There’s a major hate story coming out of the tabloids this week regarding Winona Ryder and it’s making my heart sad this morning. I don’t understand the point of it. What did Winona ever do to anyone besides make amazing movies in the 80s/90s? She should get a pass on all things from Reality Bites alone. And it’s not like she’s a big gossip draw. Ever since her little stealing episode a few years back she’s stayed out of the spotlight taking small roles as they came along. So I don’t get it. It’s like I said a could days ago regarding Kristen Stewart and the unwashed/can’t get over Robert Pattinson stories. Calling Winona Ryder crazy is just too easy. It’s too obvious. She’s kooky and she doesn’t care. But let’s talk this out anyway.

According to the National Enquirer Winona has gone off the deep end again. She’s dyed her hair white and is slamming ex-fiance Johnny Depp and ex-friend Gwyneth Paltrow to anyone that will listen. She still thinks G’s a skank for stealing her Shakespeare in Love part and is calling Depp a predictable douche by leaving Vanessa Paradis for 20-something blond, Amber Heard. So far I haven’t heard anything I haven’t heard before and she’s right on about the Johnny Depp part. Apparently Johnny’s heard her comments and couldn’t care less and I’m sure G is laughing somewhere exotic.

The only thing I actually like about this story is the Johnny Depp backlash. Have you felt it lately? Since when is it OK to rip on Johnny Depp? It seems his golden boy veneer is losing its shine with his latest bomb. Come to think of it, can Johnny carry a movie if he’s not Captain Jack Sparrow? And Winona’s career is actually on the upswing. She stood out in Black Swan, got great reviews for The Iceman, reteamed with Tim Burton for Frankenweenie  last year and has a couple more high profile gigs lined up. Is this anything close to Johnny’s career? Hells no. I’m just pointing out things aren’t what they were ten years ago. So is this why she’s getting lippy all of a sudden? I doubt it because, again, I think this story is for shit. I’m just pointing out cracks in Johnny’s armor. But citizens rejoice! There’s another Pirates movie coming out so he’s got that to fall back on.