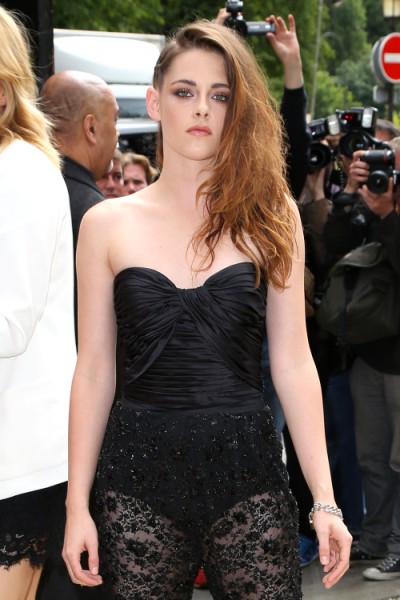 This story is just too easy to make up. Kristen Stewart’s weight has always been barely there. She’s naturally super tiny. Her hair normally looks a little on the unwashed side. She rarely looks less than disgusted in public. So to come up with a “Kristen’s Miserable And Can’t Cope Without Rob” story only truly shows me someone’s lack of creativity. But that’s what Star magazine’s going with this week.

It seems even after the summer road trip with friends, new tattoos, Hooters adventures and Paris Fashion Week, Kristen is still miserable without her Twilight other half.

“Kristen’s been trying to have a good time, but it’s difficult while Rob’s on her mind. She can’t be bothered to eat and the weight is dropping off her. She’s not in the best place right now and saying she can’t cope without Rob,” a source told the mag.

She really didn’t look that beat up in Paris. If anything Kristen looked like Kristen. I have no doubt she’s still reeling from the break up. You don’t date, live with, spend virtually all your time with a dude that long and not have some major separation anxiety when he pulls the plug. But for all intents and purposes she appears to be all right. She hasn’t bailed on her commitments. She’s got work coming up. What else should we expect from her? And does it look like she’s anorexic and at death’s door? She pretty much showed us everything in Paris and she looked exactly the same. She didn’t look gaunt or sickly in the slightest. If she’s refusing to eat and can’t cope then she’s doing a pretty good job not showing it.

What do you think when you look at the pics? Is Kristen Stewart not eating because of the Riley Keough rumors?