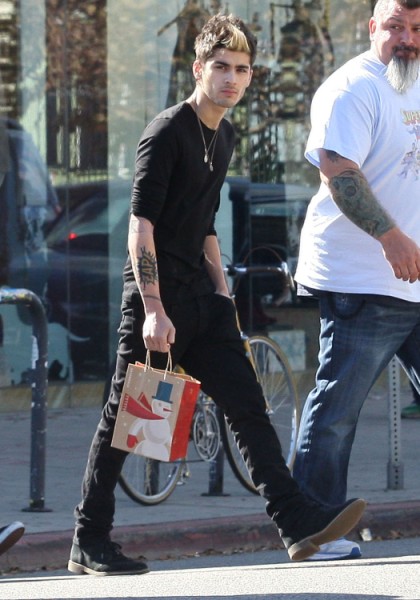 Talk him down, Simon Cowell. Talk him off that ledge. You haven’t squeezed nearly enough money out of these kids yet. But Simon’s words may fall on deaf and embarrassed ears. One Direction cutie Zayn Malik is reportedly so shattered after being caught cheating on his girlfriend that he’s considering leaving the crazy popular band.

According to Celebuzz, Malik has been “rocked to the core” ever since the cheating claims were made by Australian stripper Courtney Webb. Webb told the world that they slept together behind the back of Malik’s long-term girlfriend and Little Mix singer, Perrie Edwards. I don’t know about you but I usually side with the heart of gold stripper in every situation so it must be true!

Celebuzz’s source goes on to say that the singer is having a hard time coping with the media’s constant invasion of privacy, time away from family and grueling work schedule. The band has a never-ending tour starting later this month and still need to make time to promote a concert movie and documentary. Milk ’em for every penny Cowell!

But that’s not the best part. The source says that Malik “feels that being caught out with Courtney has made the band look bad, and is still worried about how bosses will react in the long run.” Oh, that poor sweet child. Doesn’t he realize he’s supposed to be a rock star? The bosses are probably loving every bit of this scandal. Harry Styles assuaged his Taylor Swift break up with alcohol and strippers! Malik needs to take a couple deep breaths and gain some perspective.

But still, you have to feel for the kid. None of these boys knew what they were getting into. Cowell told them they were going to be stars but it’s got to be tough getting thrown into that maelstrom at such a young age before you’ve had time to get fall down drunk and enjoy lap dances in private. Such are the trials and tribulations of boybanders.

Do you believe Zayn cheated on Perrie Edwards? Is that indiscretion worth Zayn Malik quitting One Direction forever?