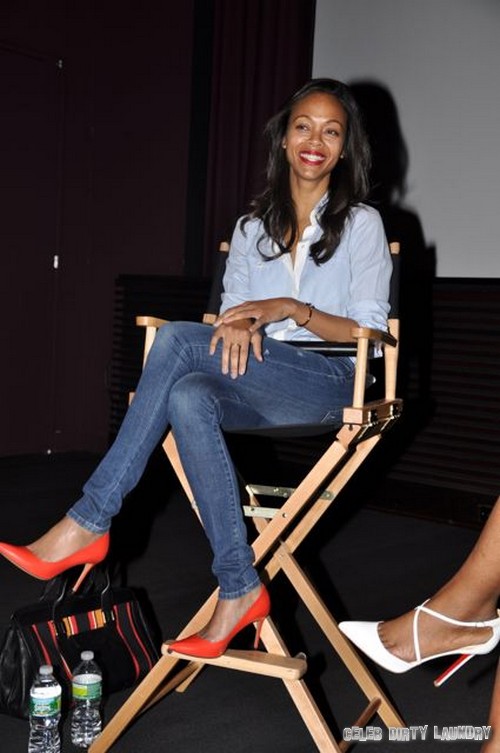 Immediately after the screening of her newest film, Star Trek Into the Darkness, Ms. Zoe Saldana herself came out to greet the audience for very interesting “Q &A”.  The 34 year old actress, supposedly single, took time to discuss her movie but the questions tended towards the personal.

Relaxed and set to talk the nitty gritty, the first question of course was her recent statements on ending up with a woman. Everyone wanted to know if she was in fact bisexual. However Zoe refused to label herself and instead claimed she was open to being loved. If you’re looking for further explanation then you will be disappointed.

The number one impression you’d get from the actress is that she’s not to explaining her life away. In her own words “I don’t need to ask for permission”. She willing to let you get to know her so that you know she is a committed actress and one of the many female role models out there. But she will not be selling her pound of flesh.

As many have noticed, Zoe tends towards the stronger feminine roles. When asked about her film choices, she doesn’t shy away from confessing she wishes to portray real women. Real women are not damsels constantly in distress. That’s not who she is nor whom her female role models are.

She has respect for herself enough that she wouldn’t just take a part for the money. Even if it’s an off-Broadway play or a movie; you will not be seeing Saldana in a just look pretty role. Something I couldn’t help but notice was a role fulfilled by Alice Eve in her recent movie. I won’t tell he if you won’t.

Personal cattiness aside, I can’t say there’s a reason why I wouldn’t like Zoe. She wants respect for her work not forgiveness for her life. I prefer the first generation Latina who sits in front of people and say she will only choose strong characters instead of some ignorant Barbie gladly pronouncing she’s not a feminist.  And no I’m not putting titles on her that’s just my perception.

She won that high title from me the minute she talked about kids today. With millions putting their business out there in their desperate need to be the next Kim Kardashian, I respect the woman who says fame isn’t everything. Being able to be happy while having a work ethic is what should be striven for. No matter what the income may turn out to be. Thank You, Ms. Saldana. I would tell your people to suggest tweeting what you said but I doubt anyone would be able to look past the whole lesbian leanings.

Are you surprised? Tell me your thoughts below.