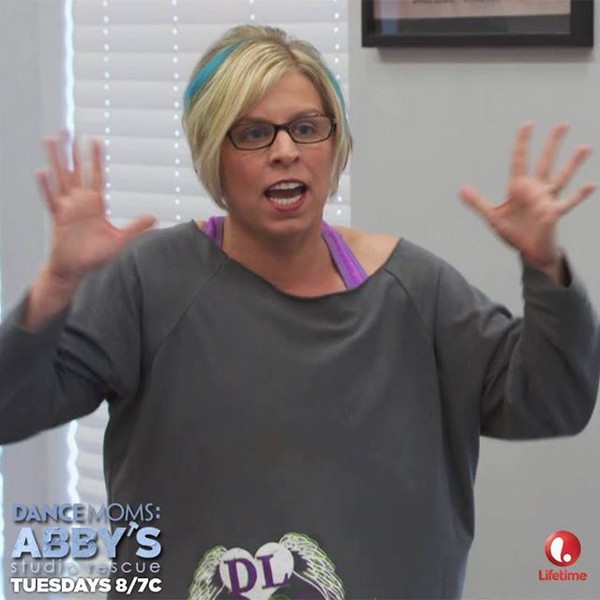 Tonight on Lifetime Abby Miller’s Abby’s Studio Rescue returns with an all new Tuesday September 23, Season 1 episode 4 called, “Legacy of Lunacy.” Tonight, Abby heads to a Dance Legacy in Indianapolis, IN where she finds an overbearing studio owner at war with her irresponsible daughter over studio operations.

On the last episode Abby arrived in Shelton, CT, and found a studio owner in total denial about the problems at her studio. Abby enlisted the help of Maddie, Mackenzie, Kendall and Nia from “Dance Moms” to show her the error of her ways, but were the problems at the studio too great for her to overcome? If you missed the episode we have a full and detailed recap, right here for you.

On tonight’s episode Abby heads to Dance Legacy in Indianapolis, IN where she finds an overbearing studio owner at war with her irresponsible daughter over studio operations. Students are leaving due to the tension and unprofessional atmosphere and if Abby can’t help this dueling mother-daughter duo come to terms, Dance Legacy will surely have to close its doors.

On tonight’s episode, a power struggle at the Dance Legacy studio in Indianapolis is about to end the business in bankruptcy. The studio owner and the director get so caught up in fighting each other that they’ve steadily begun to lose their dancers. Otherwise known as the primary source of their income. And with things the way they are right now, they aren’t making a profit and if Abby can’t help them get back on track – Dance Legacy will very soon be closing its doors.

Mother and owner, Dawna started the studio after her daughter had to give up a promising career onstage in order to have a baby of her own. However the daughter, Dawn, wanted to run the studio her way and so she doesn’t really want to listen to her mother. Especially when the other woman is pointing out things she’s doing wrong.

So things tend not to get done at the day.

Yet when Abby came to the studio she at least saw one thing that was being done right and that was dancing. The students are learning technique and skill. And Abby fully believes they’ll be prepared for their upcoming showcase to draw in new students.

But the problems that are going on backstage is what will ruin the business. The instructors are lazy, the office manager is combative, and the mother/daughter duo needs to work on their poisonous relationship!

[9:03:49 PM] Kristine Francis: Because once the mom stopped putting on a front to Abby – Abby realized she’s just as much the problem. Mommy dearest has never allowed her daughter on fall on her face. Though she loved to rub salt in the wounds whenever her daughter then went and made a mistake. It’s a vindictive power play and it’s destroying their relationship and the family business. Something had to give so Abby told Dawn to buy her mother out.

Separating the business from personal relationships will literally be the quick fix. The instructors that were hired are talented but they’ve been getting away with way too much seeing as they were also Dawn’s friends. So she had to be the one to reprimand them. Coming into work late is not a joke and not taking the correct safety precautions can leave the studio open to liability. As you can clearly see – these issues can cause major problems and that was why Dawn’s own mother felt like she couldn’t trust her daughter to take the lead.

If Dawn wants to prove she can take over the business then she had to show it.

She put her instructors in their place and more importantly she got her office manager in line. Coach was being allowed to yell at the parents and that’s the sort of the thing that pushes potential clients away. She had to get her temper under control and if she couldn’t then she no one was forcing her to stay.

As for further convincing her mom to give up the studio, Dawn had to pull off a flawless showcase. One of the dances that Dawn took a personal hand with – is going to be about her relationship with her mother. It’s a dance based on a wicked queen and oppressed princess.

So not all that flattering but it still somehow proved the point that was needed. Dawn was able to buy out her mother and now she’s in charge of the studio and her mother is getting to enjoy retirement.

Things can only get better from here on out!