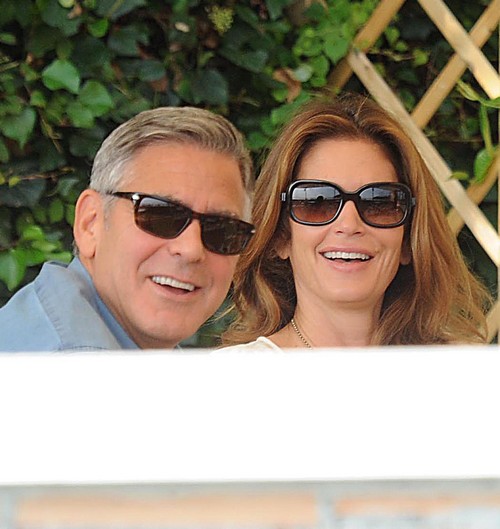 Now that Amal Alamuddin and George Clooney have been married a few months, the jealousy and cheating rumors are starting to stir. According to a recent report, Amal Alamuddin has become uneasy about George Clooney’s friendship with supermodel Cindy Crawford, and is worried that they might be cheating, even though Cindy is married to one of George’s best friends, Rande Gerber [yes, of the Gerber fame].

A ‘source’ tells the National Enquirer, “Amal wants to know she’s the only one in George’s life and will be forever. Part of it is his notorious life as a bachelor, part of it is how close he is with Cindy and part of it has to do with Cindy Crawford herself. I mean, what woman wouldn’t be at least a little threatened by someone like her?”

Ok, I can see Amal being threatened by George’s ‘notorious life as a bachelor’, but what does that have to do with Cindy Crawford? Cindy and George have always been platonic friends, and if Amal was the type of woman to get insecure over another woman’s looks, I don’t think George Clooney would have ever married her in the first place. He married Amal for her brains and her class, and I’m sorry to say, but George’s current circle of friends is sorely lacking in that department. I mean, I’m sure they all know how to have a good time, but there’s a reason that George Clooney finally settled down.

Either way, I’m sure jealousy does play a component in their marriage, and I’m just as sure that it’s a two-way street. What, you thought Amal Alamuddin was a saint before she married George? Puh-lease. They both have their dirty romantic histories, and just like any other married couple, they likely discussed it before they decided to take the plunge and say their vows.