Amanda Bynes Shoplifting Update: Caught Stealing TWICE In One Day – Barneys and Pookie & Sebastian – Time to Take Her Off The Street? 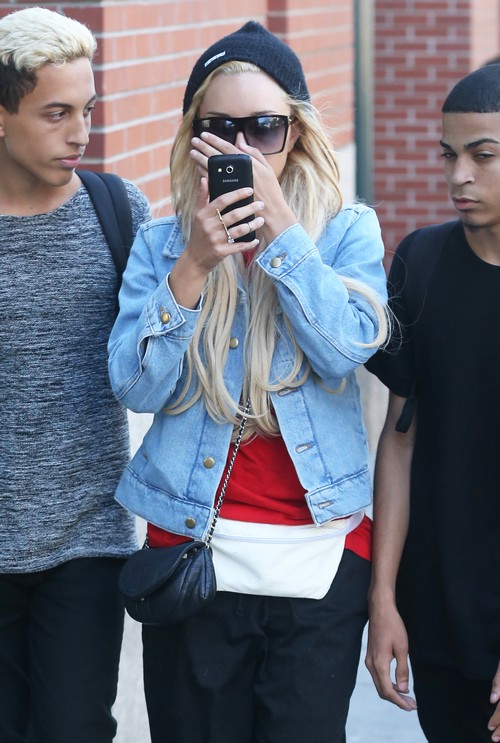 Amanda Bynes has allegedly gotten banned from Barney’s after getting caught shoplifting at the store this week. Amanda has unfortunately not been getting the help she needs, nor has she stayed under the care of her parents. No one knows exactly what led to her downward spiral this time around, but we know that she was kicked out of her fashion college in LA a few months ago. We also know that Amanda Bynes was no longer under her parents’ conservatorship as of last month, and in fact, certain sources claim that Amanda’s parents had no idea what happened to her.

What we can say so far is that Amanda got kicked out of her school, started doing drugs again, and supposedly stopped taking her anti-psychotic medication. All of this led to her getting arrested for a DUI last week, which then led to increased media scrutiny. And the public eye is NEVER good for anybody who’s having mental health issues, as Amanda’s already proven in the past.

Amanda was then spotted out and about NYC, talking to herself and acting bizarre, before she turned up at Barney’s on Wednesday and tried to steal a $200 hat. Apparently, she was apprehended by security after trying to walk out with the hat without paying for it, although she allegedly claimed that it was to protect her against the paparazzi. Barney’s was very kind regarding the whole situation, and the security just asked for the hat back and refused to press charges. However, they did ask her to sign a no-trespass form that will guarantee that she doesn’t come back to the store again.

Update: Amanda was in fact accused of shoplifting twice on Wednesday, October 8!

TMZ says: Employees at Pookie & Sebastian began following Bynes around the store because she was acting suspicious. We’re told they didn’t recognize it was Amanda, and just thought she was a “half-naked, homeless crackhead.”

Bynes tried to bolt with a shirt stuffed between her arms. When an employee stopped her and asked if she was going to pay, Amanda said … “Do I really have to buy this?”

The answer, of course, was yes — and we’re told Bynes was actually cooperative … whipping out a credit card to cover the $128.

Looks like Bynes is not sane and will be shortly arrested or put on a psychiatric hold. It’s time to take Amanda Bynes off the street.

Troubled actress Amanada Bynes hides her face while out and about in New York City, New York with friends on October 6, 2014. The 28-year-old former child star recently told In Touch that she is engaged saying, “I am very needy for friendship and I hate men. I want to f— them, but I can now say I’m engaged — get away from me. I want to be married and I want to be away from people.” Amanda is supposedly engaged to a young man named Caleb, who is 19 years old and lives in Costa Mesa, California. FameFlynet