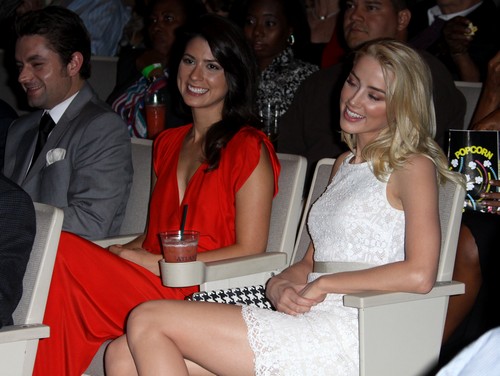 Johnny Depp has been pretty confident in his relationship with Amber Heard. The two met in 2009 and fell in love while filming The Rum Diaries. Amber ended her lesbian relationship with Tasya van Ree in order to be with Johnny and hopefully boost her career but the two ladies have stayed in touch over the years. At first it was a friendship that Johnny had encouraged because he and Amber are planning a summer wedding so he felt like they were fairly unbreakable but according to the March 10th print edition of National Enquirer he is now having second thoughts.

Amber recently spent several hours at Tasya’s Hollywood home and when she returned home Johnny was stunned by the shift in her. Apparently Amber still has some seriously strong feels for Tasya and he is now wondering whether or not they are hooking up again. Amber is known to be super independent and it’s one of the things that first appealed to Johnny but now he is beginning to rethink a lot of things. Amber and Tasya’s bond is a whole lot stronger than he once realized and it is causing him to watch Amber like a hawk. Obviously that isn’t going to work very well with her need for freedom.

Amber and Johnny first hooked up while in other relationships. Do you think that Amber has drifted back to her ex for real or is it really just a friendship at this point? Will they end up getting married or will this be one of those engagements that fizzles out? Tell us your thoughts in the comments below!