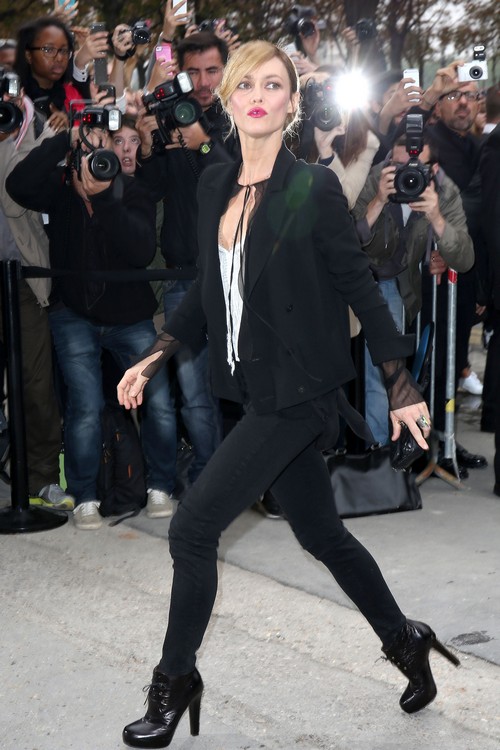 Word to the wise – don’t bother asking Vaness Paradis about her former boyfriend or else she will go off! The 41 year old actress  flipped off the paparazzi when they callously asked her about the Johnny Depp and Amber Heard engagement rumors. As the story goes some paps had corned her leaving L.A.’s Aroma Café with a friend when they demanded to know if she had heard already about Amber Heard‘s shiny new ring. Not that there’s been any official announcement, but all the same they wanted her reaction. And because they’re the paparazzi let’s not even pretend they asked nicely. They probably shouted at her “Why do you think Johnny Depp is prepared to marry Amber when he never married you”! Such hateful words like those would have been the final straw for anyone. Particularly when there’s some truth in it.

The fact that Vanessa stopped at the finger rather than a physical assault shows she’s at least chose to be an adult about the situation. If she were to attack anyone then it would have been the blow-up doll wearing the ring. After all she might be one of the many woman that Johnny has proposed. And believe me there is a list. Vanessa’s name just happens to never have been on it.

Vanessa and Johnny were together for 14 years and by all appearances looked very happy together. Then (as I’ve always suspected) – he met Amber. They filmed The Rum Diaries together and very soon afterwards Johnny and Vanessa decided to call it quits. From his breakup with Vanessa to his new romance with Amber the timing was a little too close for comfort. Still, and this might have to do with the two young kids, Vanessa and Johnny have remained cordial towards each other ever since.

So when the photographers asked this woman about whether or not Johnny and Amber were in fact engaged; then got what was coming to them. They almost certainly deserved worst and should count themselves lucky she stopped at giving them the finger. If she were a man like Alec Baldwin, Kanye West, or Sean Penn they would have known not to cross this line. But no she’s a woman. One they were hoping to make cry just so they can get a higher price for the photos. I’m proud she remained defiant and didn’t try to be a wilting flower. It  shows them who they’re messing with! I don’t see any problem with Vanessa behavior. Do you?