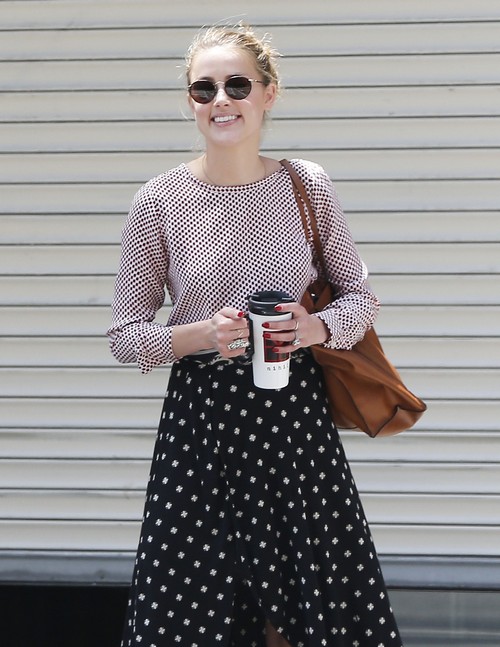 The magazine claims, “They may never get married, but Johnny Depp, 51 and Amber Heard, 28 do have big news. They’re expecting! After telling friends for weeks now that they are “actively trying” to conceive Amber is showing every sign that it worked.” A friend of Amber’s told OK! that, “She’s glowing and has definitely put on four or five pounds. And, she goes home early every night now.”

This article in OK! Magazine just adds to multiple other signs and stories that have been leaked to the press regarding a possible bun in the oven over the course of the last few weeks.

There really is no doubt in our minds that Amber is pregnant; ironically, there is no doubt in Amber’s dad David Heard’s mind that she is not pregnant. In a recent interview, David was certain that his daughter and Johnny Depp would be tying the knot this autumn. And when asked if he was going to become a grandfather, he explained that the Heard family is “traditional” and there will be no Johnny Juniors until after Depp and Heard say “I Do.”

It sounds like Johnny and Amber are trying desperately not to upset Grandpa Heard, and that is why they haven’t confirmed Amber’s pregnancy. The celebrity couple is obviously trying to get down the aisle before her baby bump becomes blatantly obvious.

Do you think Amber Heard is pregnant for real this time or is it another false alarm? Let us know what you think in the comments below!

Amber Heard in LA on August 3